Sewing Your Own Funeral Clothes 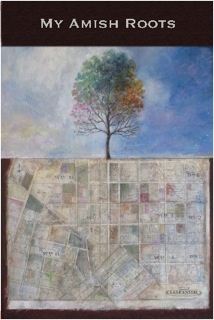 Today’s guest post is from Shawn Smucker, coauthor of both “Think No Evil: Inside the Story of the Amish Schoolhouse Shooting”, and “Twist of Faith: The Story of Anne Beiler, Founder of Auntie Anne’s Pretzels.”

Shawn lives in Paradise, Pennsylvania with his wife, four children, four chickens, and a rabbit named Rosie. He blogs daily at shawnsmucker.com about writing, the strange things his children say, and postmodern Christianity.

His most recent book, My Amish Roots, explores the roles of family, death, life, tradition, and legacy against the backdrop of his Amish ancestry.

In high school, a friend of mine missed a stop sign while driving. Her car flew into the intersection where another car hit her, pushing her off the road between a telephone pole and a stop sign. When the paramedics arrived and began to make sense of the chaos, they realized that her car had struck an Amish man standing on the corner. He died on the scene.

Months later, after everyone had gotten out of the hospital, my friend and the other girls in the car went to visit the Amish man’s wife. Her response to them?

“It must have been his time to go.”

Do we have any tangible ways of preparing for death? Or do we spend most of our time denying the fact that it will someday happen to us?

As I explored my family history, I made some interesting discoveries regarding how my great-grandmother prepared for her own death:

My mom looked at my great-grandmother (Mummi) lying in the coffin. Over the white funeral gown she also wore an organdy white cape and apron, the very same one she had worn on her wedding day. Organdy is a plain- woven, sheer, stiff cotton fabric. Mummi had altered it in later years to fit her – her body had changed from her wedding day, as all do.

I don’t know if Mummi ever did this, but I imagine her standing in front of a mirror, altering her wedding cape and apron, not having worn them for 60 or 70 years. I wonder if she thought about the difference between the young girl who had first worn that cape and apron, looking forward to life, and the 90 year-old woman reflecting on a life. Probably not. Mummi seemed very matter-of-fact. I don’t know if she would have given much value to melancholy reflections.

Something about making your own funeral clothes sounds very peaceful to me: acknowledging the inevitability of death, planning for it, staring it in the face for a moment, but then placing that realization under the bed, going about your everyday life, knowing there is little to be done about it.

When Amish people die unexpectedly, sometimes it is left to the living to make their funeral clothes. My aunt remembers visiting some relatives the day after a loved one died. The daughters sat in a circle in the living room. They would cry, and they would sew, and then they would graciously allow someone else to have a turn.

“I’ll do this sleeve,” one of them would say through tears. It was an honor for them to make the clothes their loved-one would be buried in, and still they passed the garment graciously, giving everyone a turn.

I want to live my life in a way that gives me peace regarding death.

How about you? Does the thought of death terrify you or bring you peace?

This entry was posted by Caleb Wilde on December 8, 2011 at 1:45 pm, and is filed under Dying Well, Guest Posts. Follow any responses to this post through RSS 2.0.You can leave a response or trackback from your own site.