Weird Deaths of History: The Horrible Demise of György Dózsa

This is an R-rated death tale.  You’ve been forewarn. 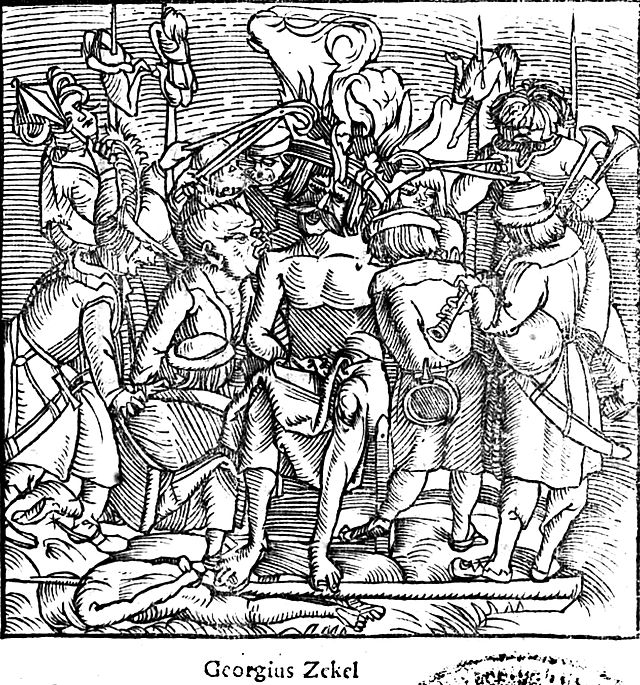 As his suppression had become a political necessity, Dózsa was routed at Temesvár (today Timişoara) by an army of 20,000[5] led by John Zápolya and István Báthory. He was captured after the battle, and condemned to sit on a heated smoldering iron throne with a heated iron crown on his head and a heated sceptre in his hand (mocking at his ambition to be king). While he was suffering in this way, a procession of nine fellow rebels, who had been starved beforehand, were led to this throne. In the lead was Dózsa’s younger brother, Gergely, who was cut in three before Dózsa despite Dózsa asking for Gergely to be spared. Next, executioners removed hot pliers from fire and forced them into Dózsa’s skin. After pulling flesh from him, the remaining rebels were ordered to bite where the hot iron had been inserted and to swallow the flesh. Those who refused, about three or four, were simply cut up which prompted the remaining rebels to do as commanded. In the end, Dózsa died on the throne of iron from the damage that was inflicted while the rebels who obeyed were let go without further harm.[6]

This entry was posted by Caleb Wilde on February 11, 2015 at 10:49 am, and is filed under Aggregate Death. Follow any responses to this post through RSS 2.0.You can leave a response or trackback from your own site.