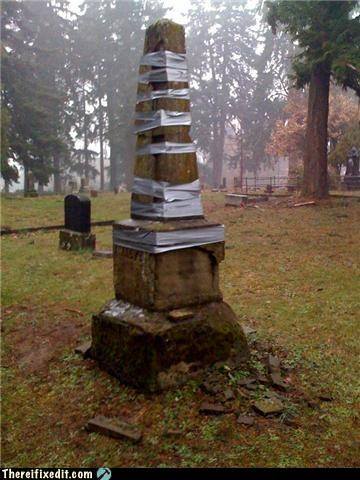 I’m not a fan of huge grave monuments.  Freud talked about them being a phallic symbol of pride (i.e. an afterlife form of dick measuring) and I’d have to agree with him.  Large and grandiose monuments seem to say, “my dead body is more important than your dead body.”

And while large monuments may be superfluous, they can also become deadly.

In the Northern States of the US, when spring comes the ground begins to thaw from the long winter and it becomes mushy and uneven … and, at times, unstable (can anyone say, “Potholes”?)

When there’s a large stone on top of said unstable ground, that stone can fall.

Via The News Station:

THROOP — A man decorating a gravesite for Easter died Monday morning when a headstone fell on him in Lackawanna County.

Police say Stephen Woytack, 74, of Scranton was the man killed at St. Joseph’s Cemetery in Throop.

Throop police say Stephen Woytack was kneeling beside his mother-in-law’s headstone as his wife was on the other side, tying a cross on with string. The stone fell on Woytack, killing him.

Kubilus (the caretaker at St. Joseph’s Cemetery) says each spring when the ground begins to thaw, some of the bases tilt and the stones on top can slip.

“I’ve come over and saw six stones fall from the winter. Winter, and the ground gets soft and the stones fall over and you have somebody come and pick them up.”

This entry was posted by Caleb Wilde on March 31, 2015 at 1:17 pm, and is filed under Aggregate Death. Follow any responses to this post through RSS 2.0.You can leave a response or trackback from your own site.