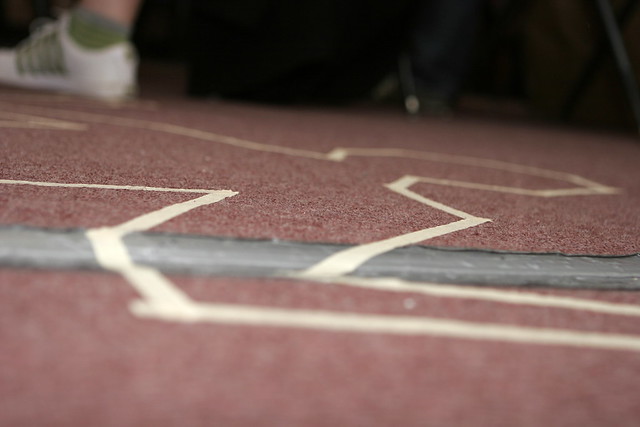 After Hurricane Katrina ravaged my hometown of Pass Christian, MS I was left with next to nothing. My belongings were either swept into the back bay near Bay St. Louis, or left soaked with only what could be described as a toxic gumbo of mold, brackish water, and sewage.  The few things I had left were a few books of poetry and some CD’s, the stuff that would fit into a 98 Kia Sephia.

I was 18, fresh out of graduating high school and only a few weeks into my freshmen year of college when Hurricane Katrina hit. With the feelings of summer still in the air I made the rushed decision to take the destruction of my life and turn it into a way out. I needed money and an apartment, my parents and siblings were living in Florida temporary. So without guidance I hastily quit school and decided to find work. The odd jobs were relentless, back breaking in fact, like helping gut houses out in my town to where there was nothing left but a solid shell, everything gone except wood. Others included laying tile or landscaping; stuff I admittedly wasn’t in love with doing.

Soon thereafter, I was offered the opportunity to work for a DME company delivering Durable Medical Equipment from a friend who had lost everything just as I had done. The job was simple, I was to deliver the equipment to homes and hospitals. The equipment ranged from hospital beds, bed side commodes, oxygen and the related stuff. I was to also show the patients how to use the equipment after I assembled it all. My deliveries took me all over South Mississippi into patients homes and nursing homes. I dealt daily with hospice patients, people with a mere hours left to live, their families, and a vast array of folks from every walk of life.

One delivery stands out more than any of them in my mind. It was early fall almost dusk, when I got the ticket to fix a hospital bed and move it from one room to the next. The delivery was the last one of a long ass day, a Friday to be exact. I could practically taste the freedom of the weekend. This particular delivery would offer a challenge I was getting used to: It was in a FEMA trailer, at a lot off of I-10 in Gulfport. These trailers were small and often challenging maneuvering bulky equipment around. Needless to say I was ready for this problem and expected to be in and out.

I knocked on the door and a polite elderly lady answered, the patient was her husband, a senior with terminal brain cancer. He was sitting in a wheelchair in front of the TV asleep. She proceeded to show me the room and I began the process of disassembling the bed. I was sweating as it was hot inside the trailer as was most homes I visited. The bed was taken apart with ease and soon I was setting it back up in the adjacent room. It was then I hear a big loud THUD. The women begans crying “Help Me!” I immediately run into the living room to find the patient on the floor. The women pleading for my response, my help.

Except I, by law, could not under any circumstance touch the patient. Hypothetically if I did help, and the patient was to die I could be arrested, sued or fired. This was explained to me countless times during my job orientation months prior. So I did what any 18 year old would do, I ran. I ran outside and into the safety of my work van. I called my boss, who we will name Ralph. Ralph proceeded to tell me to get the signature for delivery and GET OUT of there. He would call the hospice nurse in charge of the patient or an EMT. His voice was of concern, but also nervousness for me his youngest delivery driver ever. I was scared and morally confused about what I should do.

I would like to say I gave in to the pleads and cries by offering my hand of help. However I can not say I manned up because I was still a boy trapped in this strange land between Hurricane Katrina destruction,  medical equipment, hospice, death, and mostly fear. I left the FEMA trailer and never looked back. As I returned to the warehouse, Ralph my boss only offered a simple “Are you okay?” and that was that.

6 months later I was home from work watching the local nightly news when a photo of this couple  flashed on my TV. They had been murdered in cold blood and the killers were arrested soon after. They were looking for money, one was a neighbor in the park who occasionally took care of the man.  My heart sank and then shattered into a million pieces. All I could think of was how I left that couple months prior. How she was crying, and pleading with no physical strength to lift him off that cold, dank, FEMA trailer floor. I left somebody when they were in need and at the end of their life. I began to cry, the cry only a kid of  now 19 can cry when his heart is broken. My body still aches with regret.

The next day at work I was given the ticket from FEMA to pick up our equipment from the crime scene so they can move the FEMA trailer out of the park. This pick up would alter me and change me from a boy to a man. At about 11am  on a cloudy February day I pulled into the park off of I-10.  I had to pick up the bed, oxygen, commode, wheelchair,  and a shower chair. The same wheelchair the man fell out of and onto the floor. I felt, as if in this moment Deja Vu and Karma were real. I felt as if God was playing a cruel trick on me by making me relive my regret.

I assumed the equipment would be outside the trailer waiting, and that a clean up crew would have already cleaned the trailer. I never in a million years would have thought I would be going inside this place. The equipment was not outside, it was still inside and I discovered this as I was greeted by a FEMA official smoking a cigarette near the entrance of a door. The glass on the door had been knocked out and police tape was blocking the entrance.

“This is my first time inside,” the FEMA official declared. With a solemn look on her face. I said “It’s my second.” She looked confused.

I realized the reason she was smoking was because it was to cover the smell, she explained to me that the bodies were discovered about 6 days after they were murdered. She also explained that in the police reports she received, that the killers “Not only murdered the couple, but turned the heater on to its maximum temp, as well as turning on the oven and burners. They did this in hopes of killing the dog, and at this point killing the bedridden husband from heat exhaustion.”

She opened the trailer with a set of shiny jangling keys, which I noticed had a smiley keychain  on it. The smell instantly hit my nostrils, it was a smell that almost a decade later I still smell from time to time like a phantom of harshness, or the God of Regret punching me in the face. There was a pull of blood and what I assumed was coagulated yellow bile hardened on the floor a mere foot from the door. That was the spot she died. She was shot to death with, an unknown to me, amount of bullets. There were bullet holes in the recliner where she was sitting when she was killed. The living room trashed, with furniture overturned and obviously ransacked. There were bloody footsteps leading into the kitchen before they trailed off down the narrow hall. Around the oven there was plastic cooking spoons partially melted from the heat.

His room was basically untouched from the way I left it that day months ago. There was no sign of struggle or anything just the makings of a robbery gone bad. The pick up of the equipment was without trouble, I got in and got out. Filled with sadness, and regret I finished the order in a half an hour. After it was all said and done the FEMA official closed the door and locked it. She explained that they would come to pick up the trailer in a few days and maybe burn it but she wasn’t sure. She offered me a cigarette, I accepted. Then she drove away without saying a word, never knowing my story of guilt and regret with this couple. I took a drag of the cigarette and immediately vomited on my boots.

I’m  28 years old now and I often think about the delivery, the couple, the murder and that trailer. I replay those scenes in my head like a movie, or maybe it’s just me trying to keep their ghost alive, like a family members who passed away suddenly.  I like to say I have no regrets in life, but that would be a lie.

ABOUT THE AUTHOR: Caleb Cook currently resides in Birmingham, AL and is the author of 4 books of poetry including “Troubleshooting for the Modern Soul” and “The World All Strung Out”. When he isn’t writing he is a father, husband, and chef.

This entry was posted by Caleb Wilde on November 24, 2014 at 8:27 pm, and is filed under Guest Posts, Murder. Follow any responses to this post through RSS 2.0.You can leave a response or trackback from your own site.