« To Bury a Father
The Aztec Death Whistle is Horrible » 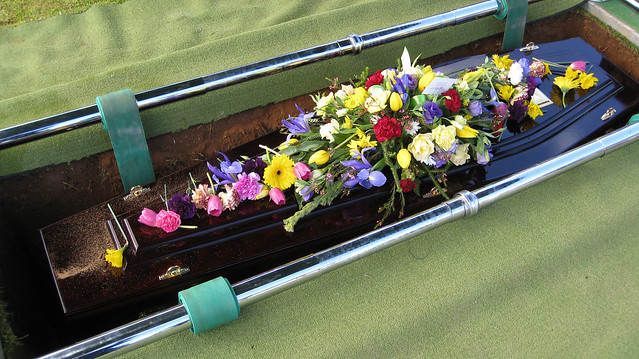 1.  Embalming is required by law. Embalming is NEVER required for the first 24 hours. In many states, it’s not required at all under any circumstances. Refrigeration is almost always an alternative to embalming if there will be a delay before final disposition.

2.  Embalming protects the public health. There is NO public health purpose served by embalming. In fact, the embalming process may create a health hazard by exposing embalmers to disease and toxic chemicals. In many cases, disease can still be found in an embalmed body. A dead body is less of a threat to public health than a live one that is still coughing and breathing.

3.  An embalmed body will last like the “beautiful memory picture” forever. Mortuary-type embalming is meant to hold the body only for a week or so. Ultimately, the body will decompose, even if it has been embalmed. Temperature and climate are more influential factors affecting the rate of decomposition.

4.  Viewing is necessary for “closure” after a death. When the death has been anticipated, family members have already started their “good-byes.” There is relatively little need to see the body to accept the reality of death. In fact, according to a 1990 Wirthlin study commissioned by the funeral industry, 32% of those interviewed found the viewing experience an unpleasant one for various reasons.

5.  “Protective” caskets help to preserve the body. While gasketed caskets may keep out air, water, and other outside elements for a while, the body will decompose regardless. In fact, a gasketed or “sealer” casket interferes with the natural dehydration that would otherwise occur. Fluids are released from the body as it begins to decompose, and the casket is likely to rust out from the inside.

6.  “Protective” or sealed vaults help to preserve the body. Nothing the traditional funeral industry sells will preserve the body forever. If there is a flood, however, such vaults have popped out of the ground and floated away. (Mass graves after the plague in England were ultimately found to be without health problems, according to the 1995 British health journal Communicable Disease Report. Burial in containers, however, often kept the disease “encapsulated.”)

7.  Coffin vaults are required by law. NO state has a law requiring burial vaults. Most cemeteries, however, do have such regulations because the vault keeps the grave from sinking in after decomposition of the body and casket, reducing maintenance for the cemetery workers. Grave liners are usually less expensive than vaults. New York state forbids cemeteries from requiring vaults or liners, in deference to religious traditions that require burial directly in the earth. Those who have started “green” burial grounds do not permit vaults or metal caskets.

8.  Vaults are required for the interment of cremated remains. Alas, with the increasing cremation rate, many cemeteries are making this claim, no doubt to generate more income. There is no similar safety reason as claimed for using a casket vault. Any cemetery trying to force such a purchase should be reported to the Federal Trade Commission for unfair marketing practices: 877-FTC-HELP.

10.  Cremated remains must be placed in an urn and interred in a cemetery lot or niche. There is no reason you can’t keep the cremated remains in the cardboard or plastic box that comes from the crematory. In ALL states it is legal to scatter or bury cremated remains on private property (with the land-owner’s permission). Cremation is considered “final disposition” because there is no longer any health hazard. There are no “cremains police” checking on what you do with cremated remains.

11.  It is a good idea to prepay for a funeral, to lock in prices. Funeral directors selling preneed funerals expect the interest on your money to pay for any increase in prices. They wouldn’t let you prepay unless there was some benefit for the funeral home, such as capturing more market share or being allowed to pocket some of your money now. Prepaid funeral money is NOT well-protected against embezzlement in most states. Furthermore, if you were to move, die while traveling, or simply change your mind—from body burial to cremation, perhaps—you may not get all your money back or transferred to a new funeral home. The interest on your money, in a pay-on-death account at your own bank, should keep up with inflation and will let you stay in control. Please note: We’re seeing more low-cost, low-overhead funeral operations opening up, so prices may go down in the future in areas with open price competition.

12.  With a preneed contract, I took care of everything. There are over 20 items found on many final funeral bills that cannot be included in a preneed contract because these items are purchased from third parties and cannot be calculated prior to death. Extra charges after an autopsy, clergy honoraria, obituary notices, flowers, the crematory fee or grave opening are typical examples. All such items will be paid for by the decedent’s estate or family, in addition to what has already been paid for in the preneed contract.

13.  Insurance is a good way to pay for a funeral. Interest accrued by an insurance policy may be outpaced by funeral inflation and is generally less than what is earned by money in a trust. When a funeral is paid for with funeral insurance, either the funeral director will absorb the loss (and many reluctantly do)—OR figure out a way for your survivors to pay a little more: “The casket your mother picked out is no longer available. You’ll have to pick out a new one, and the price has gone up.” If what you have is life insurance, not funeral insurance, it may be considered an asset when applying for Medicaid. In that case, you’ll have to cash it in, getting pennies on the dollar. The same may be true if you’re making time payments on your funeral insurance, and, in hard times, you decide to stop making payments. In fact, the company may be able to keep everything you paid, as “liquidated damages.”

14.  If you have a Living Will you won’t linger on with a lot of feeding tubes and extraordinary measures. One of the findings from a major study supported by the Robert Wood Johnson Foundation was that hospitals often fail to comply with Living Wills. The Living Will is more likely to be honored when there is an aggressive family member to intercede, especially if that person also has a Durable Power of Attorney for Health Care.

Funeral Consumers Alliance is a nonprofit organization dedicated to protecting a consumer’s right to choose a meaningful, dignified, affordable funeral.

This entry was posted by Caleb Wilde on January 22, 2015 at 8:52 pm, and is filed under Consumer Rights. Follow any responses to this post through RSS 2.0.You can leave a response or trackback from your own site.