Having just arrived to work, I walk into the office and found a paper tablet with the inscription, “So-and-so is at the Brandywine Hospital.  Released.  Coroners Case.  Autopsy.”

I loaded the pickup van, stopped at Dunkin Donuts on the way and a half-hour later I was at the Hospital.  I went through the normal procedural paperwork, and got back to the morgue where the security guard awaited me.  We pulled the stretcher out of the fridge (the gentlemen had been dead since Sunday [the family had only called us this morning as they awaited the autopsy]) and unzipped the bag.

I didn’t know how he died and wanted to look at him to make sure there wasn’t an obvious and horrific cause of death.  He was autopsied that much was obvious, but no abrasions or other violent injuries.  And he was young.  I couldn’t tell how old he was, but I knew he wasn’t much older than me.

I called dad and let him know that if the family wanted embalming, that embalming was possible.  That call proved useless as I arrived to the funeral home before the family arrived at 11 and in the end they would choose cremation.  I unloaded the van and awaited them to show.

The widow and her mother came through the door.  And we found out the deceased was only 36 years old.  Five years older than me.  Too young.

My phone started ringing.  I went back to another room and answered it.  It was Nicki, my wife.  “Can we come to the funeral home and show Pop-pop Jeremiah’s Halloween outfit?”

I thought to myself, “Well, the family is here.  And Pop-pop is meeting with the family, but why not?” 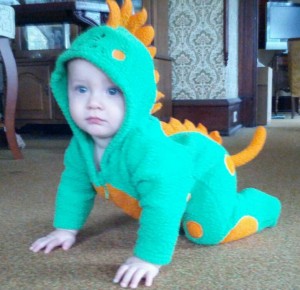 A couple minutes later and Jeremiah was coming through the front door with his dinosaur outfit on.  And all of a sudden he was the center of attention.  The widow and mother came over, he smiled at them, they smiled back and their eyes started to tear up.  They laughed.  Jeremiah laughed.  More tears.  Their mind had momentarily forgotten their grief, but their body had not.

Tears were all they had.

A smile from a dinosaur allowed them to relax enough to cry.

As the tears rolled down their checks, and as Jeremiah’s smiles waned, they remembered.  Small talk ensued for a minute or two.  Small talk isn’t natural around death.

They looked at my dad and he ushered them back to see their deceased beloved a last time before I took him to the crematory.

This entry was posted by Caleb Wilde on November 1, 2012 at 3:04 pm, and is filed under Death of a Spouse, Funeral Directing. Follow any responses to this post through RSS 2.0.You can leave a response or trackback from your own site.