Do Funeral Homes Charge too Much? 10 Thoughts on the Cost of Funerals

Do you think funeral homes charge too much for their merchandise and services?

I asked this question on my Facebook page yesterday.  Over 200 people answered.  And the discussion became pretty heated.  Being that I like hot topics, I thought I’d take a stab at the question.

Let me preface this article by saying that I am not an economist, nor am I an exceptional business man.  The following are ten observations that are a combination of experience in the funeral industry and my heart felt intention to meet the needs of the people I serve – needs that often include an economical funeral.

One.  Yes, there are bad guys (and bad corporations) in the funeral industry.  Legit racketeers.

Two.  Yes, there are good guys.

Funeral directors who are more concerned with helping you through the funeral process than with making money.  There’s probably more good guys than bad guys.  We’re out there.  Find us.

The industrialization of dying has removed the dying of our loved ones from home care.  The institutionalization of dying means that you will probably die in an institutional setting (hospitals, nursing homes), where “professionals” treat the body while (often) ignoring social and spiritual aspects of dying.  In fact, three out of four deaths in the United States occur in a hospital or nursing home, outside of our home surrounding and outside of the comfort of our family.

With the industrialization and professionalization of death and dying, we have had the responsibility taken away from the community, and without that responsibility, without that personal investment in dying and death, we no longer see the full value of funeralization.

“You may not be able to change the world, but at least you can embarrass the guilty”, said Mitford.  In Stephen Colbert-esque fashion, Mitford’s “The American Way of Death” wittingly embarrassed the abuses of the funeral industry in the 1960s and paved the way for the “Funeral Rule” in the early 1980s.

The “Funeral Rule” is meant “to protect consumers by requiring that they receive adequate information concerning the goods and services they may purchase from a funeral provider.”[1]  And while some of the abuses in the funeral industry have been quelled by the Funeral Rule, the depiction of funeral directors as “oleaginous salesman pushing me to buy a mink-lined steel casket with an Eternal Memory Foam pillow fringed in Flemish crepe and gently scented with lilac”[2] has – to one degree or another – remained in the public perception.

On the one hand, it’s important to recognize that Mitford’s criticisms were – and, in some cases, are — warranted; on the other hand, it’s important to recognize that Mitford viewed the funeral industry through the lens of economics and class.  She seemed to believe that the funeral industry was based on a desire to assert one’s standing in society.  Why else would you spend a couple grand on a funeral, unless you were attempting to distinguish yourself from others?  And funeral directors capitalized on this desire to brag in death.  In your moment of intense weakness, we play on your pride and reach into your wallet.  So, of course we are overcharging … at least, that’s part of the public perception.

And this leads us to the value of a funeral.  In a capitalist market, value is determined by the market … by you.  If you value it, you’ll pay for it. And seeing value in a funeral is the real question.  It’s not, “Do funeral homes charge too much?”; rather, its, “Is there real value in funerals?”  Once we answer the value question, then we can answer the cost question.

If you don’t see value in what a funeral home is offering you, find one that offers you the product and services that you do value.

If you don’t see value in the products that the industry is offering you, demand different products and service.

If we do indeed charge too much, it’s because the market doesn’t see value in what we’re offering.

The funeral home that is geographically closest to us charges roughly two grand more per funeral than our funeral home.  We know some of the people they bury and – because it’s generally known that our funeral home is rather inexpensive – I often wonder, “Why do they go to Such-and-such Funeral Home when we’re less expensive?”  My conclusion?  Trust.  They have a better relationship with that funeral director than they do with us.

Because we recognize that death has altered our reasoning, when someone dies and we have to make arrangements, we want to go to somebody we trust … and, if possible, someone we already know.  In our transient society, there’s situations where we have not connections to funeral directors / funeral homes.

Seven.  Non-profit vs. for profit.

I think there’s an expectation for us to be a non-profit organization.  To be a ministry.  But, if we were a non-profit ministry, there’d simply be less consumer options.  It would be governed by a board, the products would be determined by donors and the service might be even more cookie cutter than it already is. 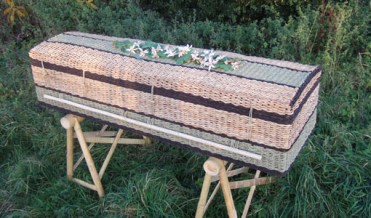 There are options.  You should be able to find a funeral home that offers a direct cremation for under $2,000.  You don’t have to be embalmed.  There are cemeteries that don’t require vaults.  There are inexpensive caskets.

You can die at home.  You can be more involved in the death process.  In 1996 Jessica Mitford was buried for $533.31.  With inflation rates factored in, you can purchase the equivalent of Mitford’s funeral today.

It’s always much more difficult to handle the expenses of a funeral when you have to pay it all at once.  Think buying a car with cash.  Not all of us can do it.

If you plan ahead, or buy an insurance policy, you can pay in increments and when the time comes it’s not as much of a shock.

Ten.  Pre-planning: Now is the Time to Think about Death.

If you aren’t aware of the corporate monsters in the funeral business, let me introduce you to Service Corporation International (SCI, also known as “Dignity” funeral homes and cemeteries).  SCI is “based in Houston and publicly traded on the New York Stock Exchange (NYX), it operates more than 1,800 funeral homes and cemeteries in the U.S. and Canada. It has 20,000 employees and a market capitalization of $4 billion” (Paul M. Barrett).  SCI is in a ongoing exchange with the Federal Trade Commision in an attempt to aquire Stewart Enterprises, the second largest funeral corporation; a deal that would effectively give SCI an additional 400 locations, and — what many argue — a violation of federal antitrust laws.

Just to be clear, I — like most independent funeral directors — don’t like corporate run funeral homes.  I think they’re bad for consumers and they hurt the already injured public perception of the funeral industry by perpetuating the money-hungry mortician stereotype.

One.  New blood in the business

One of the greatest benefits that comes out of Corporate Funeral Homes is that they give first generation funeral directors an opportunity to enter and shine in the funeral industry.  If you’re entering the funeral industry, corporate is a great place to find a job in an otherwise difficult market of family businesses that tend to only hire from within.

I know that many of you reading this post right now work at corporate funeral homes and I just want to say that the funeral industry needs you.  You bring fresh perspective, hard work and heart to this trade.  Perhaps the greatest testimony to your ability and talents is this:  theoretically, a corporately run funeral home shouldn’t work.  A “machine” shouldn’t be able to serve people in their most human experience.  But, it does — to a degree — work.  And the only reason it works is because the saving grace of corporate funeral homes is because of YOUR dedication.

Many say that corporate tends to pay their employees better than independent funeral homes.

Corporate tends to be better run, having shifts and more days off for the staff.

Climbing the management ladder at an independent funeral home is difficult if not impossible.  Like working for any family run business, the children of the owners always take precedence.  You can work at a funeral home for 50 years and you’re still not able to earn the job that the owner’s 25 year old son is given.  It sucks.  And corporate is a great place to reward those who work the hardest.

FOUR REASONS I HATE THEM:

One. Some businesses are meant to be small.

Our family has served the Parkesburg and surrounding communities for over 150 years.  We know our people.  We grew up here.  We shop here.  We go to church here.  If we did something wrong, it’d be in the newspaper the day before we did it.  Our roots go deep.  Heck, we’re related to half the local population.

If you take that heritage away and the interconnectedness we share with this community, you take away a key part in our ability to serve Parkesburg.  Some businesses are meant to be small.  Some businesses are meant to be local.  Like a herd of cows trouncing through a garden, corporate funeral homes in a small community can end up doing more harm than good.

Back in 1993, Robert Waltrip (Chairman of the Board of Service Corporation International [SCI], which owns more than 2,100 locations) stated that people who don’t buy his company’s stock “just don’t like money.”  When you go corporate, money and satisfying your stock holders are your bottom-line.

This monetary bottom-line is what produces the upselling, the “salesman” mentality and the overpriced merchandise.  And this – this corporate need to satisfy the stock holder – perpetuates the public opinion that funeral directors are just a bunch of greedy sticklers.

“An SCI funeral cost 42 percent more than a funeral at an independently owned funeral home.”

And this one, “Seventy-three of the priciest 100 (funeral homes) in the U.S. are owned by SCI.” (VIA Paul M. Barrett)

Death is one of the must human experiences.  And it needs to be served with the most of human of professions.  Corporate, by definition, is a non human entity.  It’s very unhuman … robotic … machanical … and alien.  The mixing of a corporate entity and the most human of experiences is as dangerous as unleashing Godzilla into a city.  The only saving grace — as I mentioned previously — is that these funeral home monsters hire wonderful people.  And if it wasn’t for these people, the damage would be even worse.

Our funeral home is content with who we are.  We have no desire to buy another location; nor do we want to put our competitors out of business.  We make a respectful and honest living and we’re happy with it.