« The Disenfranchised Grief of Abortions
Grief is a Circular Staircase »

They Say That Time Assuages: A Guest Post by Tess Pope

About Tess: I am a professional freelance flutist in Boston.  My favorite gig in town is playing with the Boston Ballet pit orchestra!  Thirty years after graduating from The Juilliard School with a BM and MM in music, I am taking classes once again and thinking about returning to school for a Ph.D; something that will blend my interests at the intersection of the brain, the mind and the spirit and that can have some impact on the welfare of children.  I am the mother of four children (two sets of twins).  My youngest son, Hunter, died suddenly of myocarditis (a rare virus attacked his heart).  We are bereft, yet still, we continue.

They say that time assuages

As sinew do, with age

Time is a test of trouble

But not it’s remedy

If such it prove, it prove too

There was no malady.  — Emily Dickinson 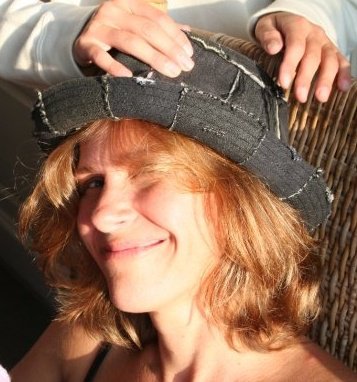 Tess with Hunter’s hands on her head.

At night, when everyone else is sleeping, and I am lying awake, unable to sleep, and unable to think and unable to remember, I go through my catalogue of memorized poems and “work” on them. I parse out their meter, rhyme scheme, meaning – and use thinking about them to keep myself from thinking. If I search through my memories, or allow the longing for Hunter to speak itself in my mind, then I am done for. There will be no sleep, only this stretching out of time, and a kick in my gut of what I can only describe as ‘horror’. It is a feeling so physical, and so utter and the pain that follows is also so physical and utter that I feel I have to STOP. My head and body ache, like a full body migraine – one part wanting the memories and images of my boy, and the other part in such sharp pain that everything closes down. And so I abandon the attempt again.

Time is always on my mind. What does it mean to be ‘in time’? Does time exist? Or is it a construct for finite minds? “Humankind cannot bear very much reality.” What does it mean to be ‘outside time’? And is that where Hunter is? I spend all my time reading about quantum mechanics and it’s implications from the viewpoint of various physicists. I read about Godel and the idea of a “World Without Time”, about mysticism and mathematics – “The Loom of God”. And what it really comes down to is this “I want my boy back.” And I agree with Emily, time never did assuage. I can’t bear to hear people talk about time and it’s healing properties. Time cannot heal. Only ‘outside time’ can heal. Because the only healing to be had is in connection. “Only connect.” And he is not here. He is outside time.

When people speak of healing I think they mean that the pain will become bearable. But the word ‘healing’ is so deceptive. It is not like a cut where the skin will knit back together, or a rash that some salve can heal. This is loss, – it is an amputation. The site of the wound may heal, but the limb will always be missing.

Also, what would it mean to “heal” from the loss of one’s own child? His cells are still in my body, from before his birth. They were so hard won, these children. Twenty years earlier and I never would have had them. I used to say “They will never wonder if they were wanted. I have the medical records to prove it.” And the misery and sickness of the pregnancies. And the worry, wondering if Molly would even be born alive, with a tumor on her lung. And at every roadblock, we had the best possible outcome. They were all born healthy, and Hunter was even born feet first. He loved how that distinguished him from his siblings. I would tell him the story how after Molly was born, he turned in the womb so that he was breach, but the doctor simply said “No problem! He’s the 2nd twin”, reaching his hand to pull Hunter out by his feet. It was the only birth that brought absolutely no pain, and still all the joy.

More than twenty years ago I went to visit Madeleine L’Engle at St. John the Divine, where she was a librarian, in New York. I lived close by and having read all her books, I took a very deep breath and wrote to her to ask for a visit. It was the most casual thing for her. She was as kind as you would think from her books. But I was still nervous and overly self-conscious and, knowing that her husband had recently died, I said something stupid about death – as if it were a kind of philosophical problem that didn’t really exist. She smiled at me sweetly, (like an indulgent grandmother I suppose) and said “Oh, no. Death is terrible. Death is horrible.” And I understood. Right then, I understood that God hates death. But mostly I remember her calmly smiling at me as she said it. The smile was, in a way, an invitation to wrestle with the hard stuff, – not pass over it with platitudes, or philosophy, or sloppy thinking, – or wishful thinking for that matter. Just like Emily in this poem. Time never did assuage. And I will always want my boy back.

Visit Tess’ blog to read more of her story.

This entry was posted by Caleb Wilde on December 11, 2012 at 10:59 am, and is filed under Death of a Child, Guest Posts. Follow any responses to this post through RSS 2.0.You can leave a response or trackback from your own site.