12 Things My Father Taught Me about Being a Funeral Director 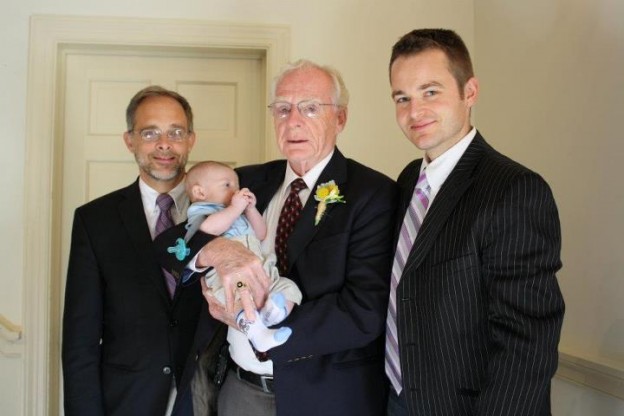 My dad is on the left, my grandfather is holding my son (four months old at the time of the photo) and myself on the right.

1. Lead by Example.
Like many new fathers, my first born has caused me to re-evaluate myself and my priorities, making me feel nervously unprepared to be the example that I now am.

In many ways, I’ve emulated my father.  Though I may not consciously know how to be a great father, there’s a real sense that I can trust the instincts my dad’s instilled.

After 11 generations of my progenitors breathing formalin fumes, I have yet to develop a superpower.  And even though I’ve wanted to be in the linage of Superman since I saw Christopher Reeves don blue tights, I’m content just being Caleb.  After all, it’s Caleb that my dad has always loved.

3. Presence is better than Presents.
The greatest gift my dad ever game me was his time.  As a funeral director and a new father, I realize how hard it was for him to make time for me.  He could have worked harder, made more money and given me cooler things, better cars, etc.  Instead, he worked less, made less money and gave me himself.

4.  Service over Business.
People are an end in and of themselves. Money is a means.  This I know, for my father showed me so.

5. Respect Your Elders.
My grandfather was born on the second floor of the funeral home and was embalming bodies by the age of fourteen (so he says).  For dramatic effect, Pop-Pop secretly hopes he’ll die while embalming a body.

Upon starting at the funeral home nearly a decade ago, I’ve studied my grandfather like a text book and, as a result, I think I could pass the “Good Funeral Director” test.  Oddly enough, it’s by respecting my elders that I’ve been prepared for the future.

6.  Smile. Look people in the eye and shake their hand.
It’s a lost art.  But, it’s an art that I’ve regularly seen my dad practice.

7. Everyone Has a Story.
My dad is one of the most tolerant people I know – partially because he has an understanding personality and partially because the funeral business makes tolerance a necessity.  While others pigeon hole certain groups that are “different,” I listen to their story.  I want to hear their story because I’ve always seen my dad be more interested in people than kowtowing to the interests of his tribe.

8.  “If you did something wrong, it’d be in the newspaper the day before you did it.”
At first, I wasn’t a fan of having a legacy I didn’t create. Everybody knows that I’m a Wilde.  And everybody has an expectation that I SHOULD be just like the rest of my family. When I was younger, the “Wilde” name was a restraint, now I wear it – not as a burden – but as a badge.

9. Integrity.
Integrity is what you do when nobody is looking.  In funeral service, there’s many times when “nobody is looking”.  And every time I’ve secretly watched my dad, I’ve seen him doing right … whether at home or at the funeral home.

11. Laugh as often as you can.
Whether it was watching The Three Stooges, Monty Python or his propensity to flatulate, my dad always found a way to make me laugh.

12. “Not everybody is as lucky as you are.”
Fathers are rarely neutral figures.  They’ve either been monumental failures or, well, father figures.  I’m lucky.  And while not everyone is as lucky as I am, everyone has the opportunity to be the best they can be and make their son or daughter as lucky as I was.  And my hope for this my first Father’s Day is that my son will one day be counted among the lucky.

This entry was posted by Caleb Wilde on June 15, 2013 at 10:50 am, and is filed under Funeral Directing, Posts About Me. Follow any responses to this post through RSS 2.0.You can leave a response or trackback from your own site.