Yes, we lay a nekked person on a table and take out their blood, replacing said blood with embalming fluid.  Weird?  Yes.

But so is cremation, sky burial, endocannibalism, famadihana and mummification.

Two.  It does not preserve the body indefinitely.

You can’t dig up an embalmed body from 1920 and expect it to be a perfect specimen of unblemished human anatomy.  It’s possible that the body is in good shape, but not probable.

The official definition from the American Board of Funeral Service Education states that embalming is “the process of chemically treating the dead human body to reduce the presence and growth of microorganisms, to retard organic decomposition, and to restore an acceptable physical appearance.”

So … about Vladimir Lenin and his dead-since-1924 body that is still viewable today?  Harry Potter magic and a few other tricks is the answer.

Three.  In most states, what is pushed out of the body goes down the drain and out into public sewage. 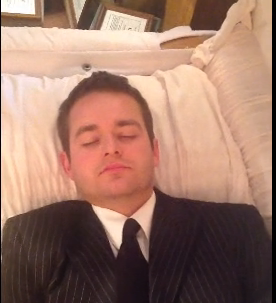 I have the luxury of practicing my death look.

There’s an idea (possibly perpetuated by societal laws, originating back to Mosaic Law and certified in pandemics like “The Plague”) that you can catch death by hanging around a dead body.

For the most part, it’s just not true.  They’re safe.  Sure, you shouldn’t want to be all buddy-buddy with a dead body, but an unembalmed body won’t kill you.  Dead bodies aren’t zombies

Five.   It guarantees you won’t be buried alive.

If you fear getting cremated alive or buried alive, embalming guarantees neither of those things will happen.  But if you live in a “First World” country, you don’t have to worry about getting buried or cremated alive.  We’re pretty good at determining death.  For the most part.

Six.  It helps make the symbol of death look pretty.

The dead body is the symbol and it’s a symbol that needs to be seen.  It needs to be seen for reasons of grief work and for death denial confrontation.  Dr. Erich Lindemann (grief management pioneer) says that a defining characteristic of persons dealing with complicated bereavement is that they never saw the dead body of their loved one.

An embalmed body helps the symbol look good.  There’s nothing wrong with that.  It’s a good thing.  In fact, at times it’s a beautiful thing.

Certainly, embalming isn’t necessary AT ALL to see the dead body.  But, it can help.

We didn’t do the whole arterial embalming thing until the mid-1800s.  Before that it was all natural and dirt and fire and other things.  The “traditional funeral” is actually rather non-traditional when you consider the sum history of Homo sapiens.

Nine.  It is rarely required.

If you’re getting cremated, it’s OBVIOUSLY not required.  For viewings and burials, local laws differ on embalming requirements (some areas require a body to be embalmed if it isn’t buried after it’s been dead for 10 days).  Alabama, Alaska, and New Jersey require embalming if you’re transporting a body to their state (which is a stupid law).  Various types of refrigeration are an alternative form of temporary preservation while awaiting a funeral service and/or viewing.

This entry was posted by Caleb Wilde on October 9, 2013 at 9:33 am, and is filed under Disposition, Embalming vs. Cremation. Follow any responses to this post through RSS 2.0.You can leave a response or trackback from your own site.