Over the past month I’ve been featured by NBC, CBS and the Facebook god George Takei (oh myyy).  And while the NBC and CBS posts were rather innocuous, this post has been making it’s rounds.  Like, it’s everywhere. 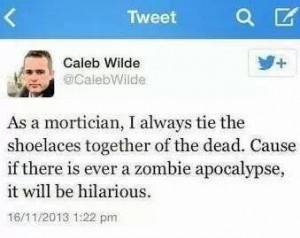 For those of us who watch “The Walking Dead” and other Zombie films, the joke is mostly funny. For those who aren’t interested in the zombie genre, though, it’s created some discomfort.  Being that the post has gone viral, millions have seen it and not everyone has liked it.

One local person (who refused to give us their name) called the funeral home and demanded that I take down the post (by the time they called it was too late and the post had already gone viral).

But when a friend that I really respect was uncomfortable with that particular tweet, it made me reflect upon my platform.  He constructively and kindly let me know what he thought via a Facebook message, and it provided me with a moment of clarification, which I communicated with this response:

So sorry. It is certainly something that I would never ever consider doing in real life. I understand why the thought of this would upset you and sincerely apologize. It has been a difficult process for me to understand how I can engage my generation in the death and dying conversation without being over the top. This is a process that I have continually modified based on constructive feedback. I thank you for being willing to offer me your thoughts and do know that I am very sorry this tweet called into question our trustworthiness. I will learn to do better.

I just want to make some things clear:  I am first and foremost a funeral director who has the utmost respect for those I serve.  And I would never, ever knowingly do anything through social media that would break the trust of my community.

Through six generations and over 150 years, our family has earned the trust and confidence of our community and I would NEVER trade that trust for anything.  I would NEVER trade our reputation that my family has built for 15 minutes of personal fame.  I have too much respect for my family and too much respect for this wonderful community that we serve.

So, why do I engage in social media?  And why are some of my posts “edgy”?

This whole death and social media thing is kinda unique.  We’re doing it together.  We’re learning.  And we’re going somewhere.  We’re learning how to live life better through a healthy perspective of death.  So, learn with me.  I’m trying my best.

This entry was posted by Caleb Wilde on December 10, 2013 at 9:29 am, and is filed under Posts About Me. Follow any responses to this post through RSS 2.0.You can leave a response or trackback from your own site.