When You Should Fire Your Funeral Home 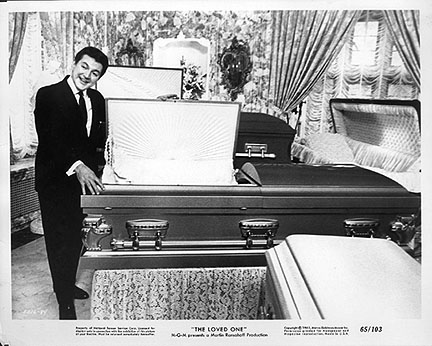 Liberace as Mr. Starker the “Casket Specialist” in “The Loved One.”

Before I tell you when you should fire your funeral home, bear with me as I describe the situation that prompted this little blog post:

I traded in my convertible for a used sedan last week.  We’re thinking about kid number two, so it was time for me to grow up and get something with four doors.  After doing a bunch of research, I found a well priced used car on AutoTrader that was only about an hours drive away from Parkesburg.

Even though I consider myself a well-informed car buyer, I hate the car buying experience. Mainly because I hate used car salesman.  If you’re in car sales or have ever been in car sales, I’m sorry.  I would probably like you in any other life context other than when you’re trying to sell me on a car.  Really, I hate the pressure.  I know the pressure, the double talk, the various sales tactics are coming, and I role play how I’ll respond … but when the time comes to hammer out a deal … ermahgerd.

This particular used car dealership low balled my trade-in.  And I fell for it.  And now, a week removed, I’ve resigned myself to losing a couple thousand dollars.

When it comes to spending money my mind sometimes gets cloudy.  I continually question myself … what are my motives for buying this?  Is it really worth it?  Are there any smarter buying options?  On and on and on until I get brain paralysis and become slightly impulsive only to suffer through a week or two of buyers remorse immediately after my purchase.

Grief and pressure have similar effects upon a person’s decision making.  The clouding.  The impulsiveness.  Factors that both funeral directors and car salesman can all too easily take advantage of if they so desire.

In fact, grief is, in many ways, similar to alcohol inebriation when it comes to decision making.  You can’t and shouldn’t make big decisions when you’re grieving.  Just as some legal contracts aren’t legally binding when one of the persons involved is drunk, so I’m not really sure that a funeral contract should be entirely binding when one of the persons is suffering from severe grief.

In its original 1975 study on the unethical practices of the funeral industry, the Federal Trade Commission wrote:

Each year, millions of families are forced by the death of a relative to make one of the largest consumer purchases under severe handicaps of time pressures, emotional distress and lack of information or experience.  There are few, if any industries where the ultimate consumer is so disadvantages or where his normal bargaining power is so diluted in a situation of such immediate need.

(ON A SIDE NOTE: I can’t stress enough how important it is to think about dying and death BEFORE it takes place.  Write a living will, write out your will, name a power of attorney, name an executor.  If you can, make “prearrangements” with a funeral home well before you die, that way your loved ones aren’t confused about what you want; nor are they having to make funeral decisions in their confused and grief stricken state of mind when you die.)

When we meet with families, we recognize this “grief confused” state and we usually give families a preface before we sell them anything, especially a casket.  When we go into the casket “showroom”, we preface it with something like this, “We aren’t salesmen.  We want you to make an informed decision and we won’t push you in any direction.”  In fact, we try to “down-sell” caskets instead of “up-sell” them.  Simply put, the expensiveness and beauty of a casket has absolutely no correlation to the amount of love you have for the deceased.  If you want to buy them something nice, that’s fine, but a pine box serves the purpose equally well.

If you EVER feel pressure from a funeral home or funeral director to buy something more expensive — or something you don’t want — FIRE THEM!  Seriously, just fire them.  Walk out if you need to.  The fact is that your mind is already clouded by grief and the last thing you need in your life is something trying to squeeze money out of you … because they will.  You just experienced a death in your life.  You need people who love you, NOT people who want to exploit you.

Yes, firing a funeral director at this point in the game is like walking out midway through a haircut.  But it can be done and it has been done.  We’ve had a couple families who have fired their funeral home and call us.  Thankfully, we’ve yet to be fired, although if the day comes, we’ll be understanding.

Firing someone can be awkward.  But it’s worth it.  You don’t need to be exploited in your grief.

This entry was posted by Caleb Wilde on January 20, 2014 at 9:24 am, and is filed under Consumer Rights. Follow any responses to this post through RSS 2.0.You can leave a response or trackback from your own site.