« Death Facts: Part 27
A Quick Video on the Embalming Process »

11 Reasons You Need to Think about Your Death RIGHT NOW

Two weeks ago we had a family that was verbally fighting over “what mom wants” for her funeral.  The fighting got so intense that one side actually brought a security guard with them to the funeral.

Thinking about your death now, also makes us think about how we die.  Do you want to die with tubes hooked into your body, being sustained indefinitely by machines while your body lives on in a semi vegetative state?  I don’t.  And I’ve made it clear that I don’t.  If you want the cyborg death and you don’t want anyone “pulling the plugs”, that’s fine … but either way you should probably make it official by creating a LIVING WILL.

That legal document (called “a will” or “testament”) that makes sure your stuff doesn’t somehow end up funding your ex-husband’s new trophy wife’s breast augmentation is important to do BEFORE you die.

Four.  Your debts don’t pay off themselves.

And if all the stuff you have is debt and darkness and you don’t want to leave your parents paying for your college or your children paying for your house, you may want to think about term life insurance.  Unlike General Motors, you don’t receive a bailout when you die.

Five.  Because you don’t know the difference between an executor and a power of attorney.

Because the less you think about death (your own death and the death of your loved ones), the more likely you’ll be hit hard with the stupid tax.

The stupid tax applies to funerals: Did you know that if you can save money by planning for a natural burial and/or a home funeral? 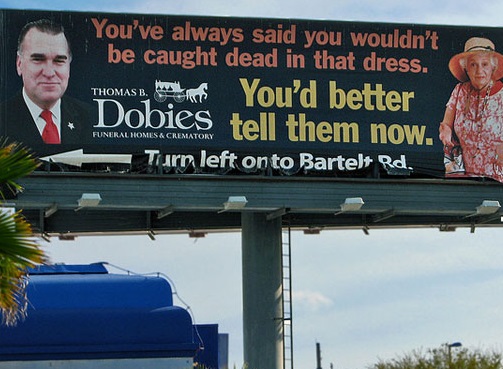 Eight.  You Can Be a neo-Zombie.

One organ donor can save up to eight lives.  So, be an organ donor and pieces of you will be walking around long after you’re gone.  You’ll be like a Zombie, but a living one … which is cooler.  It’s like a neo-Zombie.

I know.  You’re not dying right now.  And Death probably isn’t scheduled into your calendar anytime soon.  But you think, “I’ll probably die of cancer at an older age and then I’ll get my house in order.  I’ll write my will, I’ll determine my Living Will, I’ll name my power of attorney and executor, I’ll make my prearrangements for my funeral, etc. etc.”

There’s a slight problem with that line of thinking.  Dying kind of makes you drunk.  Not drunk in the “let’s have a good time” sense, but drunk in the “I really shouldn’t be making big decisions right now” sense.  Dying often changes us.  And it often prompts us to make less than objective decisions.

So, if you want to leave all those big decisions up to drunk you, go ahead.  Just let me know, so I can take your money.  Bwhahahaha.

By embracing death, we embrace life.

This entry was posted by Caleb Wilde on September 12, 2014 at 8:40 pm, and is filed under Planning for Death. Follow any responses to this post through RSS 2.0.You can leave a response or trackback from your own site.