« A Quick Video on the Embalming Process
Death Facts: Part 28 »

Cell phones often go off when we least want them to. In church. In school. During sex. And at a funeral. As other funeral directors can attest, the oddest thing about a cell phone ringing during funerals is how many people will actually answer.

“Hello. Yeah. I’m at a funeral service. Can I call you back?”

A funeral director friend once told me that the pastor’s cell phone rang while he was giving the funeral message. He answered it. Confirmed the time for his afternoon golf outing. Hung up and continued on with the service. The family – according to the funeral director – was “pissed.”

If you’re attending a funeral, the best piece of advice I can give you is this: Turn your phone off.

But, they aren’t JUST phones. And it isn’t that simple. Funerals also double as family reunions. So, you pull you phone out. Show off your recent photos of your children and your relatives “oh” and “ah” about how much your children look like a young version of your great uncle Ned.

If you keep your phone on, turn it to — preferably — silent and — at least — buzzer.

Is it appropriate to text?

During a viewing and/or visitation, yes. During a funeral, probably not.

As with talking on your cell phone, if you’re going to text it would be polite to step outside or to a discreet area of the funeral home.   Sexting, though, is off limits at any time during a funeral. 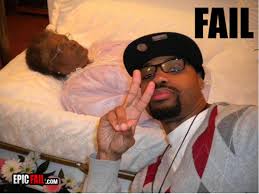 Can I take a photo of Aunt June laying in her casket?

That’s up to Aunt June’s next of kin. And when you ask, ask before the viewing starts. People aren’t always able to think straight during a viewing, so the polite thing to do is ask while they’re thinking straight … which is before and not during.

I’m bringing the kids to the funeral. Can they play “Angry Birds”?

It’s common sense, but turn the sound off. Everyone else doesn’t need to hear screaming birds and snorting pigs. And, it’s probably NOT appropriate for them to play during the funeral.

“We’re gathered here today to remember the tragic loss of ______” At which time your kid yells “yes” as he overcomes a level that’s taken him a combined 1,000 birds to clear. Not cool.

Also, video. If your children want to watch video on your cell. Either find a separate place that’s out of the way for them to watch. Or, get them to wear headphones.

What do I do when somebody else is breaking funeral cell phone etiquette?

The biggest culprits for committing funeral cell crimes are old men and women who aren’t cell phone savvy. Their phone rings in the middle of the service and they frantically pull it out of their pocket or purse and start hitting buttons. After finding the “silence” button, they breath a sigh of releif ONLY to have their phone start ringing again a minute later.

At this point they start muttering. And it’s at this point someone should step in because if you don’t their next action will be to turn it off, which will only create another loud “turning off” noise and more muttering.

“Excuse me. Can you please turn your cell phone off?” Then wait until they turn it off. That’s what I do.

This entry was posted by Caleb Wilde on September 13, 2014 at 10:22 am, and is filed under Funeral Etiquette. Follow any responses to this post through RSS 2.0.You can leave a response or trackback from your own site.