10 Things You Should Know about Cremation

One.  No such thing as DIY.

In many counties in the US, it’s difficult to get a permit to burn leaves, yet alone a human body.  There are DIY funerals and green burials (which have a large degree of family and friend involvement), but when it comes to cremation you’ll need to use a cremation provider.

In some European countries, it’s the custom to wait at the crematory until the cremation is finished; once complete, you take the cremated remains home with you while they’re still warm.

Two. Crestone, Colorado is the place to go …

… if you want to (legally) cremate outdoors on a pyre.  The body is surrounded by juniper logs and branches and set aflame.  It’s the only outdoor funeral pyre in the US and can only be used by local residents.  It’s offered by Crestone End of Life Project, which asks for a $425 donation for each cremation.  Per US-Funerals.com, “It takes about four to five hours for a body to burn completely, and as there is no way to separate the human ashes from the wood ash, the family receive about five gallons of ashes.”

One of my major gripes with the funeral industry is the utter lack of price standardization.  You can go to a funeral home and pay $15,000 for a funeral; and you can drive down the street to another funeral home and get the very same funeral for half the cost.

They will explode when cremated and can cause upwards of $10,000 of damage to the retort.  So, pacemakers need to be removed before cremation.  And don’t worry, the funeral directors/cremationists will do the removal for you.

Five.  The Body Doesn’t Need to be Embalmed

As a way to pad their pockets, bad funeral directors want to make you think that embalming is ALWAYS required.  It isn’t.  In fact, the Federal Trade Commission’s “Funeral Rule” states explicitly that funeral directors need to disclose that embalming is your choice.  And if you want cremation, there’s absolutely no reason for embalming.  But, be aware, that if you use a funeral home and want a public viewing, you’ll likely need your loved one embalmed.

Six.  But you Can Have Embalming, a Public Viewing and then Cremation

“Super obesity” is the class above “morbid obesity”.  Super obesity is the sad state where the victim can barely move or function.  These types of obesity cases can rarely be cremated in a regular retort and will often have to be cremated in a larger, more specialized retort … which can (and often does) cost more.

Eight.  You Don’t Need to Buy a Cremation Casket

Crematories (all?) require that the body is placed in some protective container before it is cremated.  Our funeral home simply uses a body bag (a body bag that comes at no charge to the family).  In fact, funeral directors are breaking the “Funeral Rule” if they tell you that state and/or local law require a casket for cremation.

Nine.  Bodies are not cremated together.

There isn’t a two for one special.  One at a time. 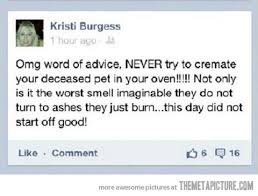 This entry was posted by Caleb Wilde on December 1, 2014 at 8:28 pm, and is filed under Disposition, Embalming vs. Cremation. Follow any responses to this post through RSS 2.0.You can leave a response or trackback from your own site.