« Eight Vintage Caskets to Die For
Dr. Masaichi Fukushi and His Collection of Body Art »

The Somewhat Strange Story Behind this Double Coffin 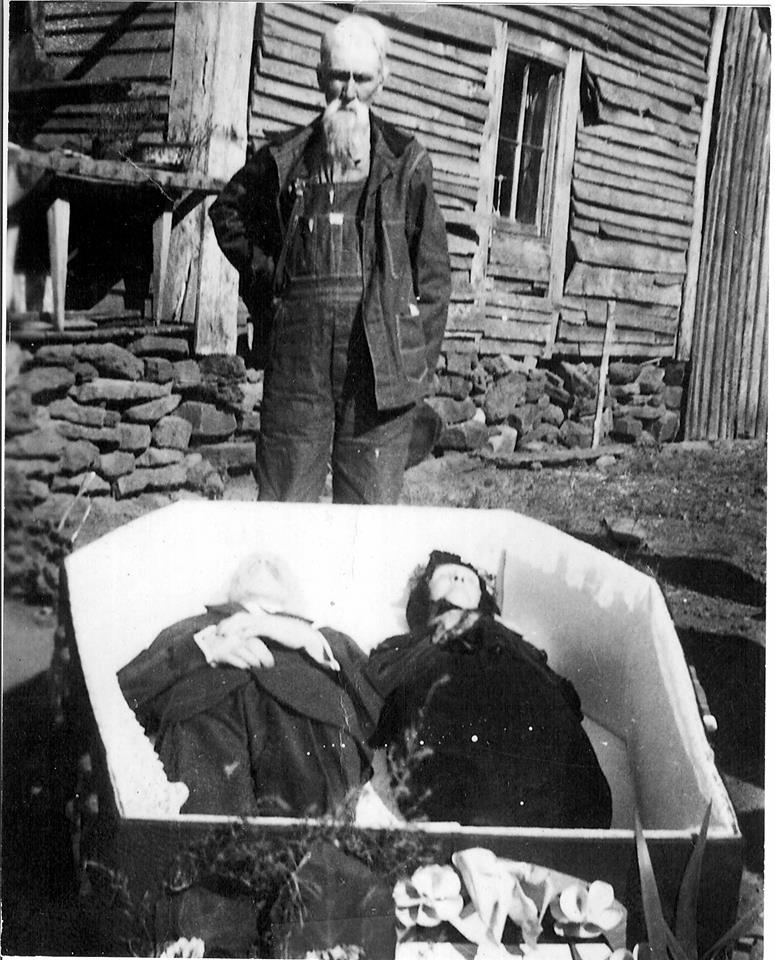 From The Madison County Musings, Spring 1987 issue: “On October 15, 1937, Aunt Easter Johnson Eubanks died at her home near Japton after a long illness. Her husband, Uncle Sog Eubanks, a religious man hwo had long expressed the wish that he and Easter would depart this life together, gave his daughters instructions for their burial and began to pray for death. Within a few hours Uncle Sog joined his wife in death.

Sog and Easter Eubanks had been some of the earliest settlers in the Japton area and had raised ten children. Sog was known to all as a good Christian and a staunch Republican. He would lead his entire family to Japton to vote in a block, having agreed on their candidate beforehand. The word of the passing of Easter and Sog spread quickly.

The news of Aunt Easter’s death was carried by messenger down the mountain to Japton. The messenger went to George Harriman, who was working in his blacksmith shop. Mr. Harriman was the natural choice to receive the news first because he was the local coffin maker. A man of large and formidable stature, Harriman was himself a unique individual. Not only did he make caskets, he also kept a general store, a farm, and some cattle, helped manage the lumber mill and grist mill, service the community as blacksmith, carpenter, stone mason, and was a leader in the Japton Church of Christ. Harriman received the news with sadness.

They walked over to where the mill stacked their rough unplaned oak lumber and began to sort out some suitable planks.

It was while he was so engaged that another messenger arrived with the news of Sog’s passing. Harriman signed and his helper, Tommy McCoy, asked him if he had ever made a double coffin. Harriman said, “No, I have made coffins for babies, children, youth and adults of all sizes, but never a double one. He considered the suggestion for a while and then said he thought it was a good idea and that he could do it. Quickly he worked out the dimensions and set to work. Soon, he was joined by Miller Rodgers and John Spurlock, local men who helped with the carpentry.

Harriman sent to Huntsville for a bundle of cotton tucking, fine while muslin, lace trimming, and some brass coffin handles. When these supplies arrived McCoy was given the task of lining the casket and lid. He did so with some carpet tacks and a horseshoe hammer from the blacksmith shop. After the lining was completed the finished coffin was taken by wagon to the Eubanks home.

At the home the bodies had been prepared, but the man who had been asked to shave Uncle Sog was unable to do so until he had braced himself with several stiff drinks. The frail body of Easter, weighing no more than 80 pounds and the tall thin body of Sog were placed together in the double coffin in front of their house and some pictures were taken. The picture that is shown here, shows Eldorado Eubanks, one of Sog’s brothers, standing behind the double casket.

Because of the strong devotion that was shared by Easter and Sog, their united burial in a double casket would be long remembered by all who attended the sinple ceremonies at Groseclos Cemetery, south of Japton. Today a double stone, with a glass encased picture of Easter and Sog, marks their resting place in the quiet, tree bordered cemetery over-looking the Lollars Creek Valley in Madison County.”

This entry was posted by Caleb Wilde on January 8, 2015 at 9:22 pm, and is filed under Aggregate Death. Follow any responses to this post through RSS 2.0.You can leave a response or trackback from your own site.