I love find these types of stories on Imgur, Reddit and the like.  I think most funeral directors have had these types of accidents occur, but — for obvious reasons — is better to share them anonymously or under a pseudonym.

Here are nine such stories from an Imgur: user 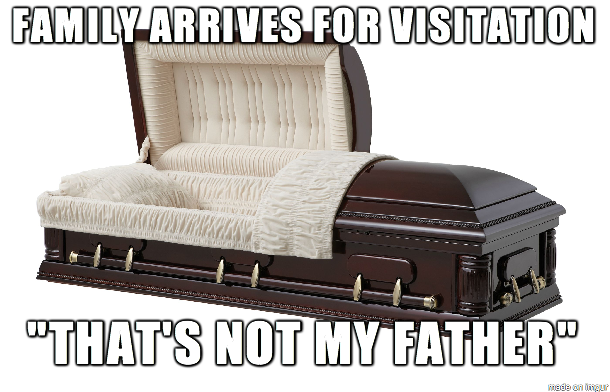 I was an FDA (Funeral Director’s Assistant) when this happened in the funeral home I was working in. It’s incredibly rare, but every once in a while someone will die in the same hospital, with the same name, and same date of birth. It’s our worst nightmare, to be honest. Thankfully (as in, thank every god you’ve ever heard of) it was a same day visitation and service with no embalming. This means that we caught the error before any irreversible changes could be done to someone else’s loved one. Double thankful, the funeral home charged with picking up the other decedent of the same name had simply brought them back to their facilities and were awaiting a family ID. This is why you always, ALWAYS, get a family member to ID the body before you do anything to it. I’ve heard of places where it didn’t work out so well and the funeral home was sued by the family, which they’d have every right to do. This isn’t an industry where fucking up is looked upon kindly. 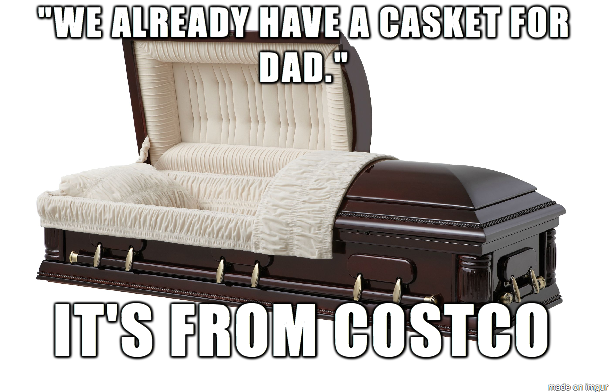 Plenty of people order caskets from somewhere other than the funeral home they’re dealing with. It’s normal, it’s acceptable, whatever you want to do. But please know that when you buy a casket from a place like Costco, you may be saving money, but you’re probably paying for shit quality. I have never directed or worked a funeral where the bottom of the casket fell out, but I’ve been told about them. There’s probably nothing more horrifying than walking up the stairs to the church and suddenly grandpa is doing a starfish impersonation on said stairs. 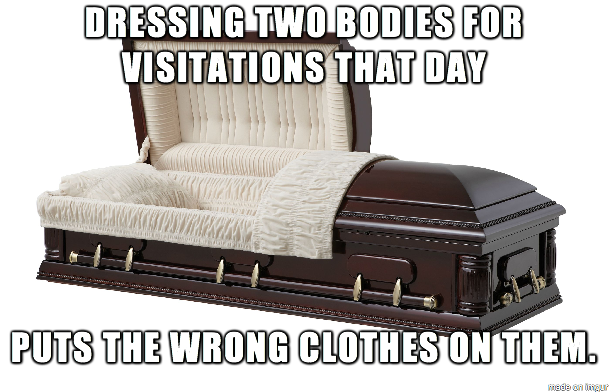 This was a team effort. My colleague had already started dressing two individuals, they had their undergarments on, when a family came in for an appointment with him. He left to help them, and I finished dressing. I started with the lady because I find dressing women easier. On went the slip, the dress, the hosiery, and the shoes. I spotted the baggie of jewellery next to her and fished out the matching necklace and earrings. Got the necklace on, and went to do the ears but found that there was no hole for the earrings. Ooookay…maybe she hasn’t worn them in a while and they closed up? Whatever. I put them back in the bag and placed them under her hand so they wouldn’t get lost and can be returned to her family. Then I moved on to the fella. I always start with the feet with men. Socks first, then pants, shirt, and suit jacket or sweater. I’d almost finished my Mr when I realised…he kinda had breasts. Not very large ones but…still. Breasts. You know that moment of dawning realisation? It was like a movie, me standing between two tables with dead people on them and looking between them with rapidly growing horror. I went over to the other table, apologised first, and then lifted the “lady’s” skirt to inspect the plumbing. Took me an hour to undress them and then dress them properly (got the earrings in this time). My colleague came down towards the end and was all “You’re STILL dressing them?” Whooboy, did he get an earful. 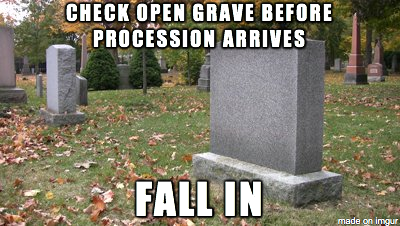 This is a story from a friend of mine: He had been told to double check that the grave the cemetery dug out was the right plot. A small but highly important detail. It had been raining for a solid week, so the earth around the edge was soft. A little too soft, as it turned out. To make matters worse, this was a double grave. What most people don’t realise is that graves are not typicaly 6ft deep unless they’re a double grave, and then they can go even deeper than 6ft. He was a tall guy, but not that tall. None of the cemetery workers were around, so he had to wait, ankle deep in muddy water, for the procession to arrive before anyone noticed that something was wrong. His boss spotted the van he’d come in, still running, and was probably getting ready to rip his intern a new one when the family discovered just what had happened to said intern. I imagine it was quite the shock. 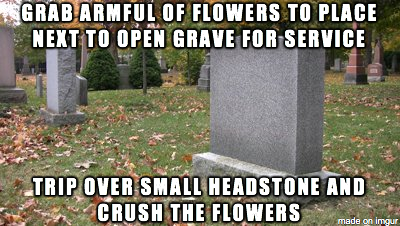 This one was totally my fault. I was running late, because I’m directionally challenged as well as vertically, and to make up for lost time I took more flowers in my arms than I should have (I’d like to point out that these typically weigh about 10-20lbs depending on the arrangement so that makes me badass, okay?). Here I am, racing across the cemetery with so many flowers that I can’t really see, in heels, in a pencil skirt, when all of a sudden I go arse over teakettle because apparently there was a very low headstone that I failed to spot. I landed face first on the other side of it and smooshed the flowers a bit. Luckily for me, the most damage was done to my pride and I was able to salvage the situation before the family arrived. I had to explain to my boss why I had two matching bruises on my shins and why my pantyhose were ripped and grass stained, but whatever. 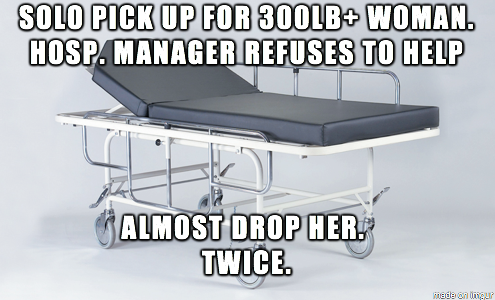 Usually when you’re transferring a decedent from a hospital, nursing home, or hospice you only send one person to do it. The understanding is that if there’s an issue, someone will be there to help you. Not this time, apparently. Everything that could go wrong, did go wrong. The hospital’s lift machine wasn’t working properly so I couldn’t line it up with my stretcher. My stretcher wheels wouldn’t lock so it slid around like soap in a bathtub. The hospital manager was a smarmy twat who had a ‘bad back’ and wouldn’t help me, not even holding my goddamn stretcher in place. The first time I almost dropped her was transferring her on to my stretcher, because Moron Management wouldn’t hold my stretcher for me. The second time I almost dropped her was (admittedly) because of my own ignorance. I was new and no one had told me that if there isn’t a ramp one should collapse the stretcher legs and maneuver it like an upright dolly (it has wheels for this purpose). The manager watched me while I struggled to get this stretcher, plus woman, down a 2ft drop. At one point she started tipping and I started frantically screaming ‘GRAB HER, GRAB HER, GRAB HER!’ which he finally did. Once I had all 4 wheels on solid ground, however, he took off like a bat out of hell. Prick. 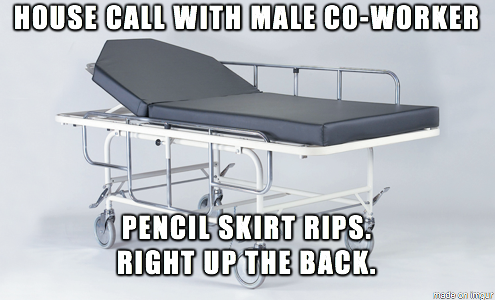 Another from a friend: In some funeral homes women are required to wear a ‘traditional’ pencil skirt and heels as their ‘suit’. In most of these funeral homes they either don’t send women on house calls, or if they do the woman is allowed to change into pants/put bike shorts on underneath. She forgot her bike shorts. Lifting a decedent with her co-worker out of a tight space (between a bed and a wall in a very cramped room) and as they began to stand she automatically corrected her stance to compensate for the awkward way they had to lift, forgetting that pencil skirts inhibit all leg movement from the knee up. Thank god the family opted not to stay in the room for that part. Her co-worker was gentlemanly enough to take off his suit jacket and give it to her because it was long enough to cover her tuchus. 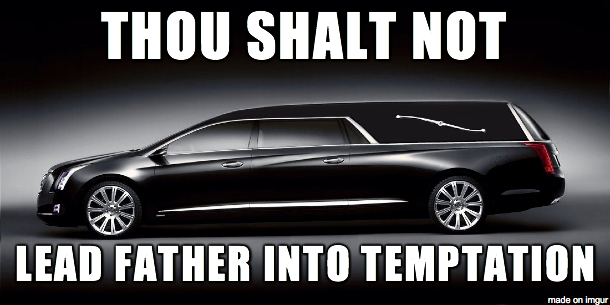 It was my day off, so when I was unexpectedly called in I realised that the only skirt I had at the funeral home was the one that I needed to have sent in to be fixed. The built in slip had separated from the skirt itself, basically giving me two layers. Gentlemen, you have no idea why this is an issue so I’ll explain: The slip is made of a slippery material, meaning that every time I took a step, the outer layer of the skirt would shimmy upwards, revealing my semi-transparent slip to the world. Naturally, I spent the day pulling it down every 2 seconds. Mid-afternoon, Bossman sends me to pick up a clergy member at the local Polish Catholic Church. I know this Father, I can’t pronounce his name to save my life, but it’s okay because he barely speaks English. I didn’t realise until I’d hopped in the car that, apparently, driving is worse than walking when it comes to the shimmying capabilities of my slip. I made a few discoveries that day: It’s very difficult to drive whilst trying to pull your skirt down. Leather seats do not help anything. And even Catholic priests will blush when you inadvertently flash just a little bit too much thigh. He prayed in Polish the entire time. It was the most awkward drive of my life. 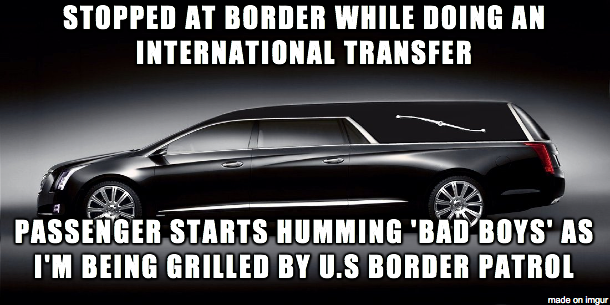 My husband is a bit of a dick. I was sent on a body transfer to Pennsylvania. I was bringing a U.S citizen who had died in Canada home to be buried by their family and my husband was accompanying me for the 14+ hour drive it would take me there and back. Plus, I needed someone to watch the hearse while I stop to pee (you can’t leave a body unattended). Problem was, my husband started talking about the movie Bad Boys II as we approached the border, and how it’s probably a pretty good way to transport drugs across the border. Would drug dogs be able to differentiate between drugs and formaldehyde? Who knows! Of course, I knew that I didn’t have any drugs in the car, or in the casket. I had a little old lady who needed to go home. That’s it. Didn’t stop my imagination from starting to run through scenarios in which the hearse was ripped apart and I was put in some American prison where they waterboard me for information. I have an active imagination, okay? People around us were staring, as if they’ve never seen a hearse before, which didn’t help my self-induced anxiety and by the time we reached the booth I was fucking sweating and my heart rate was up, and my stupid fucking husband started humming ‘bad boys, bad boys, whatcha gonna do? whatcha gonna do when they come for you?’ Thankfully, we got through with no fuss and no muss, no thanks to my husband.

This entry was posted by Caleb Wilde on May 28, 2015 at 9:05 pm, and is filed under Aggregate Death. Follow any responses to this post through RSS 2.0.You can leave a response or trackback from your own site.