« A Morgue Miracle
Al’s Soul Is in that Damned Bird! » 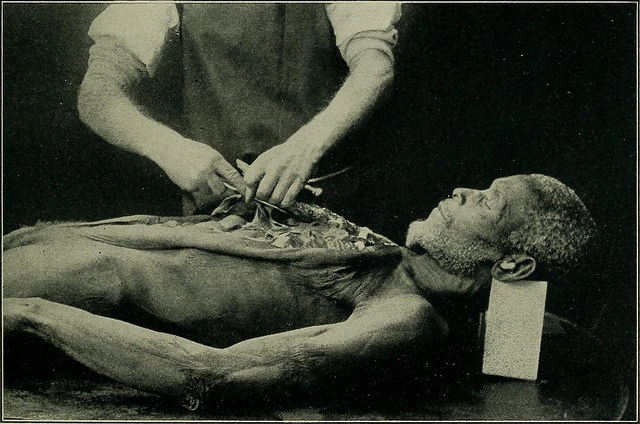 Picture is Public Domain from 1905

Trigger Warning: This post contains descriptive language about suicide.  it also contains topics that might cause a loss of appetite for foods such as spaghetti or sushi.

One.  WEIGHT LOSS.  You’ve tried for 50 years to lose weight, you finally got it off, but your terminal cancer took this weight loss thing a little too far, and it took your life too.  Embalmers can’t give you your life back, but we can put some pounds back on.  By adding large volumes of embalming fluid and using restricted drainage, we can give you back some weight back AND with some restorative art magic, we can make your weight look healthy.  It’s cases like this that embalmers can prove their worth.  I don’t believe in embalming is for every body — like many funeral directors do — but when a family says, with tears rolling down their cheeks, “Mom hasn’t looked this good for a year” you know you’re doing something right.

Two.  BAD GAS.  If you die after a huge meal at Taco Bell, and you’re full of horrific gas, our trocar can fix that.

Three.  AUTOPSIES.  Usually, the people that are autopsied are people that have died suddenly without their family and friends being able to say “good-bye”.  Autopsies are usually performed when there isn’t an apparent cause of death, or the death seems suspicious.  Autopsies are invasive.  Most involve a cranial autopsy, where the skull cap is cut off, and the brain is examined.  The internal organs are examined, which involves the “Y” incision we see on forensic TV shows like CSI.  Autopsied bodies are not pretty.  But embalmers can put the skull back together, embalm the face and the body, and make an autopsied body like normal again (although, this isn’t always the case.  Sometimes autopsied bodies present difficulties that make a body look less than normal).

Four.  EYE ENUCLEATION.  If the person dies, and they’re relatively young, in good health and registered as an organ donor, there’s a good chance that their eyes could be removed to help someone living who needs a part of an eye.  This, as you can imagine, leaves the deceased looking rather different.  BUT HAVE NOT FEAR, EYE REPLACING EMBALMERS ARE HERE!

Five.  DEATH BY GUILLOTINE.  The last recorded death by guillotine happened in France in 1977 to one Hamida Djandoubi who killed his girlfriend.  It’s very unlikely that you’ll be killed by a guillotine, but if you are, we can probably put you back together (although you’ll still be dead when we’re done with you.  Which brings me to a very important question: If they could have put Humpty Dumpty back together, wouldn’t he still have been dead?  So what’s the point?).

Seven.  GUNSHOT WOUNDS TO THE HEAD.  Our ability to fix this depends on where and how.  If the gunshot wound exits in the back of the head, and/or isn’t caused by a shotgun or a high caliber gun, we can generally cover up the entry wound and use the trusty atomizer to spray tan the filler and make everything look decent.  Many suicide cases are, to some degree or another, fixable.

Eight.  LACERATIONS.  For the most part, we can fix these.

Nine.  JAUNDICE.  Word of the day is “Bilirubin.”  Bilirubin is a yellow waste product that is usually filtered out by our liver.  When the liver starts to fail, bilirubin flows freely throughout the body causing us to turn an ugly yellow.  Embalmers can fix yellow (although we can’t always fix the green caused by biliverdin) with our magical jaundice juice that we pump as a co-injection through your arteries.

Ten.  SKIN TONE.  You haven’t been to the tanning salon because you’ve been stuck in your hospice bed?  Embalmers can fix that.  There are dyes in embalming fluid that can create different skin tones.  We can make you darker, and sometimes we can make you lighter.  We can also use the atomizer/airbrush to give you that California sun-kissed skin you’ve always wanted.

If you like my writing, please consider buying my book.  If you don’t like it, my mom will buy it back.

This entry was posted by Caleb Wilde on July 10, 2017 at 6:11 pm, and is filed under Embalming vs. Cremation. Follow any responses to this post through RSS 2.0.You can leave a response or trackback from your own site.