« It’s not our job to make tragedy a classroom. It’s our job to create a refuge.
On Death and Humor, and White House aide Kelly Sadler joking about John McCain’s Death »

My thoughts on that Russian woman who was “embalmed” alive 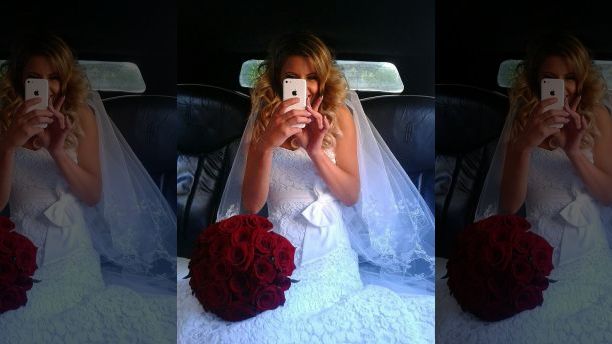 While the fear of being buried alive was a prevalent fear that had some legitimacy before the dawn of modern healthcare, today that fear — at least in countries with access to modern medical science — is unfounded.  In centuries past, the fear of premature burial was so prevalent that Count Michel de Karnice-Karnicki developed a bell system that enabled someone who was buried alive to alert those above ground that there had been a ghastly mistake. 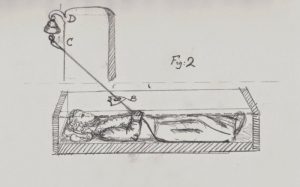 Giving farther evidence to the fact that people were prematurely buried is T.M. Montgomery, who supervised the disinterment and moving of the remains at the Fort Randall Cemetery in 1898.  He reported that “nearly 2% of those exhumed were no doubt victims of suspended animation.”

While being buried alive is impossible for an embalmed body, I’ve always had this fear that I’ll pick up a deceased person, bring them back to our prep room only to discover that they are still very much alive.  The fear is real enough that when I embalm someone I generally wait a minute or so after I make my first incision to see if there are any faint signs of life before I raise the artery and vein.  So far, I — and every funeral director I know — have never encountered a still living supposed “corpse.”

There have been modern-day cases were someone has been prematurely pronounced dead.  Here’s one such case:

Mrs Banks, 61, was found unconscious in bed after taking a drugs overdose on New Year’s Eve.  She was discovered by her husband, Claude, at their home in Stonely, near Huntingdon, Cambridgeshire and subsequently pronounced dead by David Roberts, the family’s GP.

Three hours later, Ken Davison, an undertaker who knew the Banks family, saw a vein twitch and heard her snore in the mortuary at Hinchingbrooke Hospital, Huntingdon, just as he was preparing to put her in a refrigerated body tray.

But, thank goodness, Mrs. Banks was discovered alive before any attempt was made to either embalm or bury her.  Because of modern healthcare, I’ve always regarded any reports of someone being “embalmed alive” with a high degree of skepticism.  So when I saw this title, “Russian woman embalmed alive in deadly hospital mistake” floating around the internet, I thought it was an Onion article.

This per the often unreliable tabloid The Sun, “Ekaterina Fedyaeva was said to be undergoing routine surgery at a hospital in Ulyanovsk, in the Volga Federal District of Russia, when the hospital provided her on a formalin drip, which contains formaldehyde and is used to prevent corpses from decomposing.”

I’m still hoping that this is some elaborate hoax.  But it doesn’t seem to be.  This is a once in a billion kind of mistake that could have only been made through a confluence of poorly designed and poorly practiced medical protocols.

“Her legs were moving, she had convulsions, her whole body was shaking,” said her mother, according to The Sun. “I put socks on her, then a robe, then a blanket but she was shivering to such an extent, I can’t even describe it.”

Her mother also said that no doctor ever checked on her after coming out of surgery.

“This is pure murder,” said Galina Baryshnikova, according to reports. “[It] was simply eroding her body from inside.”

She said she begged doctors to help but they told her to go home.

“For 14 hours after surgery she was living with this formalin and they did nothing,” she said.

She said a doctor eventually admitted to the blunder but did not specifically reveal the cause of her condition.

Fedyaeva was later transported to a hospital in Moscow, where she ultimately died. A criminal investigation into the cause of her death is said to be underway. — Fox 32

Pure formalin is a much strong solution that the embalming fluid we use on dead bodies.

Formaldehyde is a naturally occurring gas that is highly dissolvable in water.  When it is dissolved in water, it’s called “formalin”, which is the liquid that was intravenously given to Ekaterina.  Formalin is 40% formaldehyde.

With arterial fluid that is 2%, I can effectively harden and preserve most cases.  This is how it happens: “Formaldehyde or glutaraldehyde fixes tissue or cells by irreversibly connecting a primary amine group in a protein molecule with a nearby nitrogen in a protein or DNA molecule through a -CH2- linkage called a Schiff base” (Wikipedia).  To put it simply: formaldehyde literally rips apart tissue on a molecular level.

A slow, intravenous drip of formalin would have ripped apart the insides of Ekaterina Fedyaeva.  This is absolutely torturous.  The stuff of nightmares.  And this leads to the main question: HOW DID SHE LIVE FOR 14 HOURS?  The potency of this fluid is extreme, and — although I have no idea how long one should live with a bag of formalin in their system — I have a hard time wrapping my head around 14 hours.

The other factor that adds a twist to this story is that formalin has a potent smell.  The kind of smell that burns when you breathe it in.  However or whoever put formalin in the IV bag (and I don’t know the protocols for filling IV bags), were either without a sense of smell, extremely dense, or they did it on purpose.  My guess is that murder is a legitimate possibility in this case.

While I hope this story isn’t true, if it is true it seems that Ekaterina wasn’t conscious during this travesty.  I can only hope that was indeed the case.

Consider supporting my work by buying my book, “Confessions of a Funeral Director.”  Click the picture below to read more:

This entry was posted by Caleb Wilde on April 9, 2018 at 3:12 pm, and is filed under Death in the News. Follow any responses to this post through RSS 2.0.You can leave a response or trackback from your own site.