An “exploding dead body”, a “coerced cremation” and a lawsuit 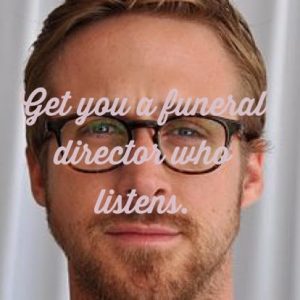 A Montana mortuary business must pay a woman $50,000 after her husband was cremated against his wishes.

The Great Falls Tribune reports a jury found a mortician at Miser Mortuaries in Conrad negligent in the decision to cremate 64-year-old Robert Yeager of Ulm after he died of liver and heart disease in October 2012.

Enid Yeager told jurors that mortuary staff pushed her toward cremation because the larger casket needed to bury her husband would be costly.

Miser’s attorneys said mortician John Nash simply recommended Robert Yeager be cremated because he couldn’t have an open casket funeral due to the swollen condition of his body. Nash said Enid Yeager signed off on having him cremated.

Jurors on Wednesday found both the mortuary and Enid Yeager partially liable. She had sought $1 million in damages.  — The New York Times

All in all, I like the ruling.  We all like black and white cases, but this one is painted in grey.  I don’t think this was a matter of maliciousness on the part of either party, but rather a communication problem, a problem that rests more heavily with Mr. Nash.

Here are some more details that help flesh out the case:

The conflict of this case was borne out of the complications in burying Robert in a casket: he died of liver and heart disease and, as a result, had grown considerably swollen with fluids shortly before and after his death. Court records and testimony included mention of splitting skin, building gases and leaking liquids.

He would have fit in an oversized casket, Miser’s mortician claimed to have told Yeager. But she alleged the funeral home staff pushed her toward cremation because the oversized casket would be very costly, and he “could not have a casket ceremony” because her husband’s body “would explode.” — Great Falls Tribune

I don’t know about you, but I wouldn’t mind my body exploding at my funeral.  In Oprah voice, “Everyone get’s a piece of Caleb.  You get an arm!  You get a leg!”

Who am I kidding, though.  Nobody has ever wanted my body.

The funeral business rests on the principle that we exist to serve you … within reason.

Having an open casket viewing for a deceased person who is in the early part of active decay generally not within reason (how he got to this point is the question I’d like to know.  I digress.).  For those of you who have been around a decomposing body, you know of the troubles in which I speak.  We’ve all smelled roadkill in the hot months of summer.  That smell is tacos to human decompositions surströmming.  Humans just smell the worst.  The last thing you’d want is an open casket viewing for a decomposing body.  It would literally be nauseating for everyone who came to the funeral with a sense of smell.

Why did Mr. Nash suggest cremation instead of a closed casket?  I suspect that the underlying and unspoken crux of this, specifically as it relates to the funeral home, may have had less to do with the troubles that come with a decomposing body and more to do with two other things:

I find it interesting that the reports specifically mention that Mr. Yeager needed a larger casket for his swollen body, a casket that would have cost more money … perhaps significantly more money.  Larger caskets often necessitate larger vaults, and larger vaults demand more grave digger costs, all of which can easily incur an added $1,000 to $3,000 in cash advances, half of which is associated with the cemetery.

This is where the problem happened.  Obviously.  Mrs. Yeager wanted something.  Mr. Nash didn’t entirely hear her. Or, Mrs. Yeager wasn’t able to express it well enough for Mr. Nash to hear her because she had “grief brain.”  But, Mr. Nash should have recognized her “grief brain” and listened a little more deeply.

Look, I don’t think Mrs. Yeager is sue-happy and just wanted to get a quick mil from the funeral home.  I think she is genuinely hurt and upset.  And she has every right to be.

I also don’t think Mr. Nash the funeral director was out to get Mrs. Yeager.  I have no doubt he had good intentions.

For those of you in the business, here are some mantras you’ve likely heard:

You know those by heart.  But here’s a level two funeral service mantra:

Because, for us as funeral directors, if we want to serve well, we have to deeply listen.

This entry was posted by Caleb Wilde on June 23, 2018 at 1:00 pm, and is filed under Death in the News. Follow any responses to this post through RSS 2.0.You can leave a response or trackback from your own site.