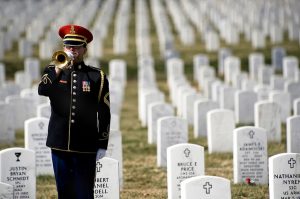 The death call came early in the morning.  I put on my dress clothes, drove to the funeral home, and scooted out of the funeral home parking lot at around 4:30 AM to the Veteran’s Administration Hospice Center.

A half-hour later I rolled into the VA parking lot, pulled into the ambulance entrance, and hit the buzzer by the door to alert the nursing staff I had arrived.

He was a small guy, no more than 120lbs.  He was 81 years old.  There was a rolled hand towel underneath his chin to keep his mouth closed.  He was in a fresh gown that the nurses had put on him after they cleaned him up for the final time.  A patriotic honor blanket — used by the VA hospice for all deaths — was draped over his abdomen and legs.

I noticed immediately that his hands and feet were wrapped tightly in bandages, which usually means that the deceased has fragile skin that easily rips, or he or she was a diabetic with circulation problems that plague the extremities, especially near the end of life.

This man was going to be cremated.  So, when I got back to the funeral home, I felt his chest area for a pacemaker and found nothing (if he had a pacemaker, I would have had to remove BECAUSE THEY EXPLODE WHEN CREMATED!).  I then unwrapped his hands to check for rings.  What I found surprised me: his fingers were totally necrotic.  I had seen diabetic tissue necrosis, but it’s usually amputated before it gets this bad. His pinky finger was no longer attached to his hand.  And it didn’t look like it had been cut off.  There was no clean incision.  It looked like it had fallen off or broken off.

I took the bandages off the right hand, mainly looking to make sure there weren’t any rings on that hand, but I was also curious to see if that hand was necrotic as well.  It was worse.  Black skin.  Shriveled.  And only two fingers remained on a hand that bore no resemblance to human flesh.  You’ve seen the pictures of the bog bodies?  That.  It looked like that.

Part of me wanted to unwrap his feet, just to see what damage had been done to his toes.  But there was no pragmatic reason to see what was hidden underneath those dressings, so I let them be.  Had he lived any longer, I’m sure his hands and feet would have been removed.  He would have been wheelchair bound and mostly dependent upon the help of others to do his daily tasks: eating, bathing, cleaning, brushing his teeth, combing his hair.

I met with his two daughters at 11 AM the same morning.

As is my custom, I like to ask questions about the deceased’s final days.  It allows me to get to know him a little more, and understand where the family is at both practically and psychologically.  It’s the little details I’m interested in, like:

Have you guys been able to sleep the last couple days?

Was your dad able to communicate with you guys until the end?

Did this all happen quickly, or was it a slow, downhill process?

As we talked, they painted a picture of a man who was a fighter.

This poor guy had it all.

He had developed type 2 diabetes in his late sixties; diabetic kidney disease in his early seventies; he had been on dialysis for years, and soon the heart problems came along.

“I’m going to beat this”, he would tell his daughters time and time again.

As things progressively got worse, he dug in deeper because he vowed “not to quit.”

Just a year early he was diagnosed with a heart problem (I forget what exactly the problem was) that could only be fixed with surgery.  Even though the doctors gave him a 20% chance of making it through the surgery, he decided to do it.  And he made it, but it left him weaker than he was before the surgery.   Soon the necrosis came.  The doctors recommended that his hands and feet be amputated.

“That’s when we had a heart to heart talk with him,” the girls said.

“‘I don’t want to give up’ was his battle cry”, they told me.  “He didn’t want to fail.  He was a vet.  He came from a hard family life.  He worked hard his whole life.  He put us both through college.  He had this mentality that he was going to pull through no matter what life threw at him.”

The girls recounted what they told him:

“Dad, you’re a strong man.  You never gave up.  You’ve loved us until the end.  And Dad, it’s okay to die.  Don’t look at this as a battle lost, look at it as an honorable discharge.”

“I don’t want to fail you girls,” he told us.  Their eyes started to well up with tears as they recounted the conversation.

“We wanted him to know that coming to the end of the journey isn’t a failure, but a victory.”

They continued by telling me that he found peace, stopped dialysis, and welcomed death towards the end.  Because death isn’t a failure.

Because it’s okay to die.

This entry was posted by Caleb Wilde on July 3, 2018 at 12:21 pm, and is filed under Dying Well. Follow any responses to this post through RSS 2.0.You can leave a response or trackback from your own site.