« Why You May Never Heal
When Grief Kills Your Faith: Some Practical Advice »

Today’s guest post comes from Celeste Donohue.  Celeste is a writer/comedian who lives in Los Angeles and is also the daughter of a 3rd generation funeral director. Her blog “Death To Hollywood” is about her life growing up in a funeral home and her current life in Hollywood. 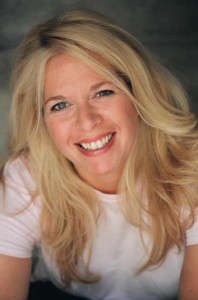 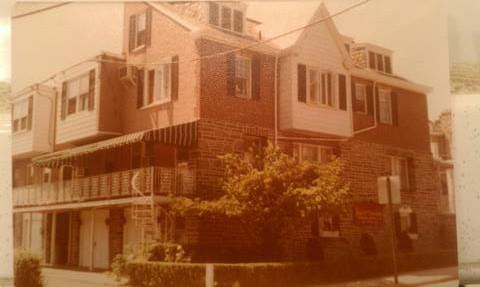 The rear entrance of the funeral home.

The way we brought the bodies in to the morgue was through the alley (SEE PHOTO to the right). There were big white doors (with brass door knobs of course) that would open wide enough to bring the stretcher in. For everyone else on our street, it was their garage. So technically, the morgue was in the garage that was connected to the basement. After the person was embalmed and dressed, we had a motorized lift to take the dead people up from the basement to the first floor. My dad told me that before it was a lift, it was an electronic chair for my grandfather to go upstairs after he had a stroke. Once my dad built the morgue in the basement he took the chair off and replaced it with a piece of wood that he could lay the bodies on.

That lift was fun. When I was really little my dad would let me ride it. I’d sit on it and he would turn the switch on and I’d start to go up the stairs. There was a light bulb on the other side of the steps that I used to pretend was the moon and I was an astronaut on my way up to the moon. Normal kid stuff, if you consider riding a lift for dead bodies normal. 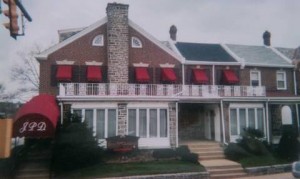 The front of the Donohue Funeral Home

That lift was later replaced with another one that was much more elaborate and cool. The new one actually came up through the floor of the parlor so that the body would already be in the casket and ready for their big day. The other lift couldn’t have held a casket, just a body. Once everything was in place; flowers, etc. no one would know that the lift was underneath the casket.

One time the body came up through the floor, was in the casket and everything seemed fine until the leg of the stand underneath the casket collapsed. We were upstairs watching TV when we heard a loud thud followed by my dad yelling a string a curse words. That may have been one of the few times I heard him say “fuck,” except he yelled it. The leg collapsed, the casket fell and the body rolled out. Luckily this didn’t happen during a funeral, it happened while he was setting up, but the family was due there soon so my dad was freaking out. Naturally, we ran downstairs and the dead lady was in the middle of the floor.

Dead bodies aren’t really fit for moving around once they’re in the casket because they’re so stiff. The body was facing down and when my dad rolled her over, her hands were still folded. Can you picture that? It was funny because people who are alive are just the opposite. My dad wasn’t able to laugh about that one right away, but we did.

Of course, my dad and brother got her back into the casket and everything was fine after she had a slight touch up. The family never knew that their loved one had been face down in the middle of the floor in her fancy dress a couple hours before that. And that’s for the best because there really isn’t room for a lot of error when it comes to a funeral. People are so distraught they probably wouldn’t find it funny to watch a dead body roll out of a casket.

This entry was posted by Caleb Wilde on April 19, 2013 at 8:17 am, and is filed under Funeral Directing, Guest Posts. Follow any responses to this post through RSS 2.0.You can leave a response or trackback from your own site.