« Aging, Dying and Being Reborn in Stop Motion
Ten Things to Hate about Me » 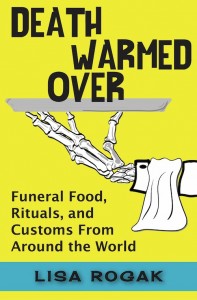 Many cultures would politely disagree. For some, not only are there different degrees of dead, but they also like to keep the bodies around until they concur that the person is 100% dead, or at least 100% able to proceed to the next world, wherever that may happen to be. Of course, in the interim, the almost-dead still have to eat, so people in these cultures continue to serve food to their undead relatives, usually foods that were favorites of the person when they were 100% alive. Sometimes the type and amount of food served to the formerly-vibrant family member depends on how dead – or almost-dead – he or she happens to be.

It’s possible that the practice of feasting after a funeral originated with early people who were determined to send their dead off with some nourishment for the journey. And whatever was left over, well, at least the living could eat it. Some cultures took this to extremes by placing a tube in the mouth of a corpse before burial, and snaking it out of the casket and up through six feet of compacted dirt. This was to ensure that the deceased would continue to receive nourishment during the long journey into the afterlife, or at long as somebody remembered to put food in the tube.

But a long journey for mourners attending a funeral may have also been responsible for the development of some death food customs. After all, it would take a number of days for word to travel about a deceased relative living in a distant village, and then an equal number of days to travel to view the body and visit with the mourners. If the grieving family expected others to come, they had to be prepared to feed them.

For most cultures today, sharing a meal after the funeral has become pretty standard; indeed, it’s considered rude to refuse. In any case, there’s no better way to prove you’re alive, as compared with the body in the box you’ve just said farewell to, than by eating. Actually, most people would include sex in their response, and indeed, food combined with carnal hunger can sometimes provide a double dose of post-funeral vitality, not to mention a jump in the birth rate exactly nine months later.

However, as funerals become more of a do-it-yourself proposition – not the embalming, mind you –with more people taking charge of planning their own funeral services with a mind towards turning it into a party instead of a sobfest, thanks in part to the popularity of the TV show Six Feet Under, learning about the funeral practices of other cultures can only help us put the fun into funeral.

Some people may believe it’s distasteful to spend time thinking about how death and food are so interconnected – after all, both are an essential part of life – but I’d like to think that many more are intrigued by discovering the differences, as well as the similarities. And my book Death Warmed Over: Funeral Food, Rituals, and Customs from Around the World – which I’ve recently reissued as an e-book after being out of print for years – is chock-full of both differences and similarities.

Here’s how Egypt does it:

Today, Egyptian culture is primarily Muslim, and funeral customs in the country generally follow traditional Islamic principles, including the distribution of food to area poor.

But aside from today’s Islamic rituals, Egyptian funeral food has a long and illustrious past. In fact, possibly the first time you learned that food was connected with funerals – aside from attending one of a relative – was in history class when you got to the chapter about the Egyptians and the Pyramids. Though evidence of fancy, elaborate feasts that lasted for days was uncovered by archaeologists working inside the pyramids, the common Egyptian also received a funerary feast send-off into the next world. In fact, the earliest known Egyptian funerals show proof of food offerings to the dead, both to the newly deceased and to the family’s ancestors. It seems that the living always went all out, as if to ensure a place for the deceased as well as an opportunity to get in good with the gods upstairs for when their time comes.

Everything from beer and wine, cakes, and even the intact head of a bull were used as funeral offerings in ancient Egypt. This makes sense, when you consider that in the days of ancient Egypt, each man was expected to devote one-fifth or more of the value of his estate to the cost of his funeral, which included feeding all the guests – both the living relatives and the dead ancestors.

In Ancient Egypt, chocolate was very much prized as a rare and expensive delicacy, the better to send the deceased off to the other side. Today, few mourners – in Egypt and elsewhere – would find fault with digging into a big hunk of chocolate cake at a funeral, wake or memorial.

Chill mixing bowl and beaters. Whip the cream until stiff, add slowly the vanilla, sugar, and cinnamon. Do not overbeat!

In a medium-sized bowl, sift together the flour, baking powder, cinnamon, and cloves. Set aside.

In a small saucepan, combine the coffee and chocolate over low heat until chocolate is melted. Set aside.

Grease and flour two 8-inch cake pans. Pour the batter into the pans. Bake in oven for 30 minutes or until a tester comes out clean. Cool in pans on rack for 15 minutes. Invert pans and cool cakes on rack completely.

While the cake is cooling, prepare the frosting. Using a chilled mixing bowl and beaters, whip the cream until stiff. Slowly add the vanilla, sugar, and cinnamon. Chill until ready.

Frost when cake is cool. Refrigerate after use.

Today’s incredible guest post was brought to us by author and journalist, Lisa Rogak.  Lisa is the author of “Death Warmed Over: Funeral Food, Rituals, and Customs From Around the World.”

She is the New York Times bestselling author of more than 40 books. Her works have been mentioned in The Wall Street Journal, Parade Magazine, USA Today, Family Circle, and hundreds of other publications, and she has appeared on Oprah. Her book Haunted Heart: The Life & Times of Stephen King was nominated for an Edgar.

This entry was posted by Caleb Wilde on November 15, 2013 at 8:34 am, and is filed under Guest Posts. Follow any responses to this post through RSS 2.0.You can leave a response or trackback from your own site.