« My Visit to a Green Cemetery
Help Us, Social Media. You Are Our Only Hope. »

“The First Day of the Rest of Your Life”

It always seems to be assumed that if we knew, actually knew when we were going to die or if we could get in touch in a visceral way of how short our time is that we would suddenly be, if not more productive, definitely more generous, more forgiving, and more loving. There’s a dozen or so modern little refrigerator magnet adages meant, I think, to inspire. There’s the classic: “Today is the first day of the rest of your life,” which, frankly, always just made me feel exhausted every time that I heard it, not inspired.

Sometimes I’m not sure that all of the Hallmark presents-Touched by an Angel-lives miraculously transformed after near death experiences aren’t the spiritual equivalent of high fructose corn syrup; a great high and a completely malevolent diet. Another classic handicap meant to inspire, of course, is “Live each day like it’s your last.” This assumption that this knowledge of our death would suddenly compel everyone to finally feed the hungry, not cut off other drivers in traffic, and tip their server takes too much for granted I’m afraid; namely assuming our innate goodwill and integrity.

At the risk of admitting even a little bit of my humanity and a fraction of my capacity for inhumanity, I’m not totally convinced that if I Knew that this was the last day of my life that that would necessarily inspire me to act with the um, higher good in mind. Maybe I’m the only asshole here, I don’t know, but assure me that this day is the last day of my life and feeding the hungry may not even cross my mind, but eating more of whatever I want is virtually guaranteed. I would probably not only be tempted to cut off whoever I wanted to in traffic, but there’s also the chance that I’d give in to the previously only fleeting flirtation to exact revenge on someone who cut me off by just going ahead and ramming their car. Tipping the server could possibly depend not on their fine dining serving skills and not even on just how cute they were, but possibly, on how graciously they lied after I slept with them. Hey, I know; it takes a big man to admit he’s at least a good quarter pig.

All of these messages frequently appear to be predicated on the presumed present-time benefits of life after death. The thinking seems to be that if we just absolutely knew that we’re eternal beings and that we are just one flattening by a city bus away from suddenly leaving here and rocketing to wherever “there” is, that we’d shape up. We’d be like Ebeneezer Scrooge and let the spirits do it all in one night. We’d be changed people; people changed for the better.

What if maybe there are some benefits in believing that you’re Not eternal. Maybe this is sometimes where atheists may arguably, have a perspective worth considering, as they focus so much on the present. It’s a great day-to-day, practical, relational theology, well, belief system; sorry. It’s worth considering, if at least, a true, present time, real life living out of “doing unto others”, rather than a constant focus on hell avoidance, heaven entry, and sin management, isn’t one of the better ideologies no matter where it’s lived out, in addition to The Beatitudes, of course; but clearly no one wants to really even talk about them.

Of course, I don’t think that I could personally be an atheist again as I’ve witnessed too much grace and mercy in my own life and first hand in the lives of others to believe otherwise. While my evolving answers may not ever exactly match anyone else’s theology profile, I do believe. As I told a friend last Easter who asked if I really believed in resurrection, “I do believe in resurrection, and not only because Jesus rose from the tomb, but because I left the house today; because I got out of bed today. Because I’m standing here, now, with my head up talking about resurrection is enough reason to continue to believe in resurrection.”

While atheists may deny the Source of Grace that believers proclaim, it’s undeniable that, too often, atheists may do a better job of living grace while making no profession at all. It’s worth noting that they don’t seem to eat their own so consistently and with such relish. I wonder if “faith without works is dead, what, then, are works without faith? Maybe not a ticket to Heaven City with it’s golden streets and virgins, if that’s your belief system, but it sure does make this place, this day-to-day, this day with your coworker, with your neighbor, your spouse, your children, even your ex-, a lot more pleasant. Perhaps, it could even be a mustard seed beginning for the prophesied New heaven and New earth; a return to the garden with the banquet table where confession and compassion are more important than what we profess.

But, for some of us, maybe the very real pressure of believing “This is It. Period.” is as motivational for us as the religionist’s fear of eternal hellfire is for them. Hindus and Christians, among other religious traditions, believe in some kind of life again later. Personally, I find this belief motivational. I mean I think there’s a real element of the kick in the hindquarters that I often need to go ahead and make that apology; maybe resolve that situation now since there’s the risk or guarantee, depending on your tradition, of running in to them Again! Now, I understand that forgiveness, and reconciliation, or any act of ours is not a ticket to heaven. That’s not how grace works. And I would not be treating it as a ticket to heaven, but instead I’d be trying to use it as an assurance that when we did see each other again, that we’d speak.

I admit to laughing when comedian, Daniel Tosh jokes, “It’s like when I meet a girl and she says ‘I’m not reeaaligious, I’m just spirit-chill.’ and he jokes that he would like to say, ‘ I’m not honest, but that’s really interesting.” Brutal? Maybe, but pretty funny and I think, may have a point. Goodness knows I’ve explored at least a few traditions in some depth, even becoming somewhat immersed occasionally. But, it does feel important to pick a path, if only because in following that path we smooth the path, we prepare the way. Author William Paul Young addresses the question of whether all roads lead to God by saying something to the effect of “I don’t know if all roads lead to God. I know that God will use any road to get to us.” I like that. That has been my experience: the experience of how this idea of radical grace and the God that has a furious longing for a relationship with us slowly, incrementally, steadily growing from a shocking idea to tiny moments of getting It in our real life.

Maybe there is more later, something after this;
something better, something divine even.
I hope so.
I believe so.
But just maybe, this is one more situation that isn’t an “either/or” equation.
Even if, or when “heaven”, or the afterlife, or that part of eternity is cued for us,
it doesn’t negate the fact that this exact, particular moment will not happen again,
no matter the truth of eternity.

This moment, that person,
this circumstance, this opportunity,
those words,
not again,
not ever,
not like this.

Maybe we can still “be here now”, even if, after this, we will always be somewhere relishing the “out of time” that eternity provides without regrets of being “out of time” in the moment.
No more ideas of time to be “out of”, no more ideas that grace and Love could ever be conditional. 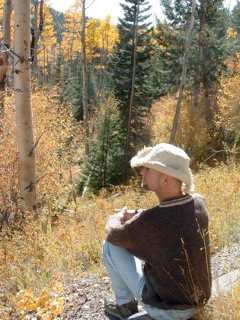 This entry was posted by Caleb Wilde on January 10, 2014 at 9:58 am, and is filed under Eschatology. Follow any responses to this post through RSS 2.0.You can leave a response or trackback from your own site.