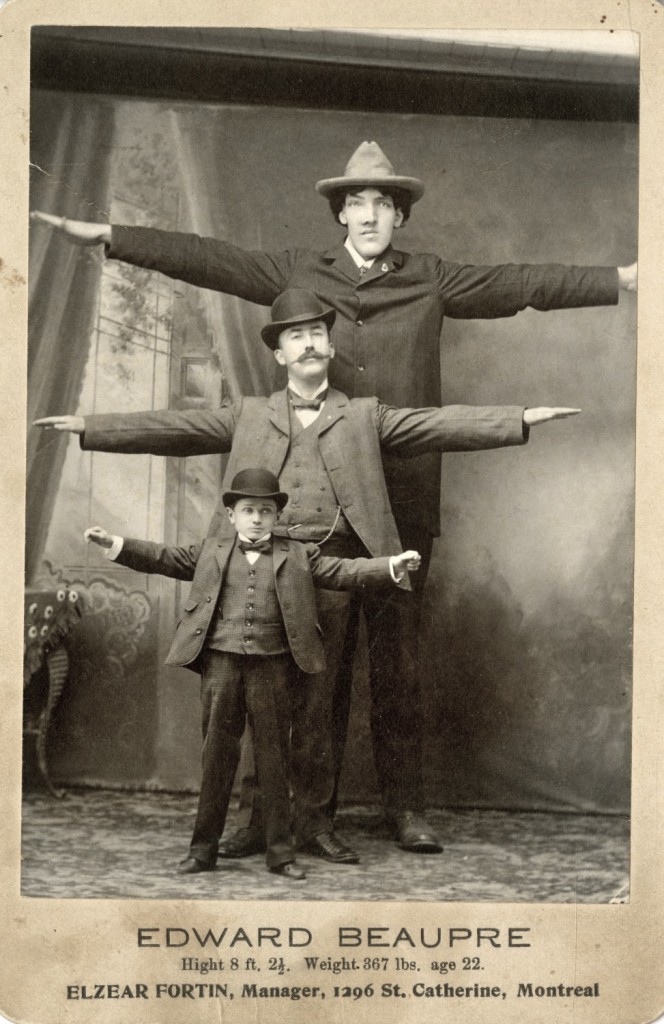 Via Obit of the Day:

Edouard Beaupré, known as “The Willow Bunch Giant,” died on July 3, 1904 of complications from tuberculosis while in St. Louis, Missouri for the World’s Fair. Having reached a height of eight feet, three inches Mr. Beaupré was one of the great sideshow attractions in the United States and Canada and was hoping to capitalize on that reputation at the fair.

Born on January 9, 1881, the oldest of twenty children, Mr. Beaupré grew normally until the age of seven when his pituitary gland began overproducing growth hormone. By the age of nine he was six feet tall. At seventeen he eclipsed seven feet.

Quiet, with little formal education, Mr. Beaupré wished to be a cowboy and was a rather accomplished horseman. (A rumor spread that he had to give up horses because his feet dragged the ground when he rode, but it was not true.) His family, in need of money, came first and he decided to use his height to support them financially.

He toured his native Canada not only showing off his stature but his strength, lifting horses on his shoulders and bending iron bars. He eventually joined the Barnum and Bailey Circus and became a star attraction but was known for his melancholy and loneliness. (It was also difficult to accomodate the large star, as hotel staff had to line up storange trunks next to his bed to add a second mattress.)

When Mr. Beaupré died at the age of 23 (still growing), his father traveled to St. Louis to collect his son’s body but he realized he could not cover the fare to ship the young man back to Canada. Instead young Beaupré became the property of the funeral home and the embalmed corpse became it’s own attraction.

Only a year after his death, Mr. Beaupre’s corpse was found in a shed in Montreal, stored there after a circus that had purchased his body had gone bankrupt. The body was sent to the University of Montreal for study. It remained there for 85 years.

In 1975, Mr. Beaupré’s nephew discovered that his uncle’s body was at the university and demanded its return. The university refused, saying that Mr. Beaupré’s remains were still needed for scientific discovery. It took another fifteen years before Mr. Beaupré was returned to his relatives. They cremated the remains and buried him in his home town of Willow Bunch on July 7, 1990.

(Image of Edouard Beaupré, in 1903, is courtesy of the Bibliotheque et Archives nationales du Quebec, via wikimedia.org. Mr. Beaupré’s face was disfigured as a teenager when he was kicked by a horse, breaking the boy’s nose and other facial bones.)

This entry was posted by Caleb Wilde on July 3, 2014 at 9:16 pm, and is filed under Aggregate Death. Follow any responses to this post through RSS 2.0.You can leave a response or trackback from your own site.