« Mobile Mortuary in Texas
21 Self-Portraits of Living after Loss »

How Would You Feel about Seeing Your Loved One Loaded into a Truck? 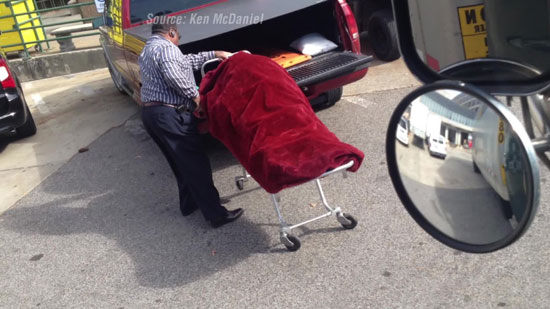 “I just sat and watched him, and I just thought, ‘You know, this is not right,'” McDaniel said. “Just the sheer shock of watching him push that body in the truck like that with the tailgate down, you know, two or three times just push … I just couldn’t believe it.”

Per the news source, “Kait8”, the funeral director is being investigated for the possibility of “immoral or unprofessional conduct”.

How does this make you feel?  Do you think this counts as “immoral and unprofessional conduct”?

Part of me says, “this isn’t a very wise move” and another part of me says, “why is it okay for funeral directors to use Suburbans (a SUV based on a truck platform) but not a fully-enclosed truck bed?

For the record, I would never do this.  And I do think it’s unprofessional.  I guess I just don’t think it counts as “immoral”.  If this were an open truck bed, where the deceased would be exposed to the elements … then it’s a different story.

This entry was posted by Caleb Wilde on November 26, 2014 at 11:08 am, and is filed under Aggregate Death. Follow any responses to this post through RSS 2.0.You can leave a response or trackback from your own site.