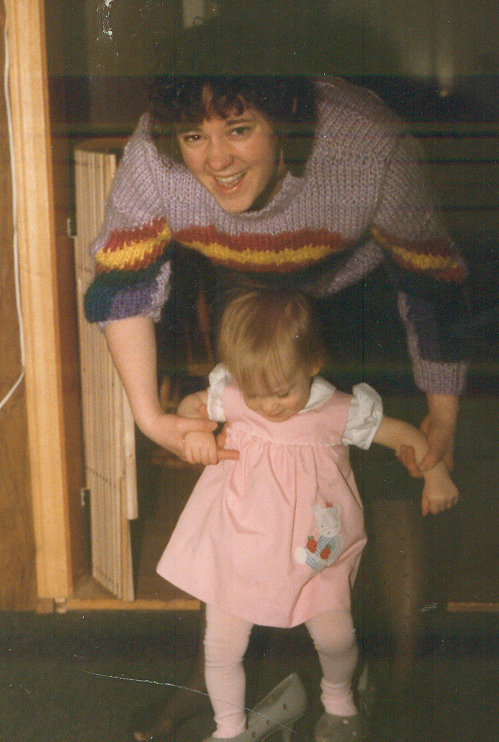 Bridget at two years old with her mom.

I will never forget that day as long as I live. I can remember how the air smelled as I walked into my childhood home for the last time believing my mom was alive, I know exactly what I was wearing, what I did with my children that morning. That is probably the most defining moment in most of my family’s’ lives. For years leading up to that day, my immediate family had been a mash of turmoil. The woman who had been our pillar for my whole life came out of brain surgery for a bleed in her right frontal lobe in 2002 as an entirely different person.

Gone was my loving and doting mother, the kind and sensitive spirited woman who my father had married in 1980, the R.N. with a Master’s Degree who opened a brand new hospital as nursing manager. This accomplished woman slowly through ten years’ time became a shell of who she was and eventually morphed into a new person.

Watching someone you love struggle with mental illness is heart-wrenching. My best description of this is like “watching a storm at sea…it whirls and whips and flies….it can see the shore, but it cannot come in…it wants to go further away into the ocean and do less damage , but its tentacles keep it in position…just beyond grasp.” My mother whirled for 10 years. Each time she attempted suicide our family would all race to the hospital just as her stomach was pumped and the respirator was placed or the priest pronounced last rites…for the 5th time. My poor Catholic God-fearing mother who advocated for the medical community, for her whole life could not be “fixed.”

That is not to say we did not try. We tried like HELL! My father spent tens of thousands of dollars on rehabs: rehabs for alcohol abuse combined with brain injury, rehabs just for alcohol abuse, rehabs just for brain injury, and rehabs for mental illness. They all worked… for a little while. However, we as people do not have the tools to combat someone who is so smart they can talk their way out of psych wards due to heightened medical knowledge.

Someone who commits suicide does not see a way out. The best analogy I have heard regarding this is similar to describing someone in a skyscraper trapped in a burning building that jumps. I believe my mom saw no way out and she “jumped.” She knew things were not getting any better. Her behavior was all encompassing of my life, my father, my husband, her sisters…. I believe in my heart she thought there was no way out for her. I don’t know ,even today, if there was. I wish she were here so we could have tried.

Her last two weeks on Earth, she had just “cycled” into a good period. My sister and I plus my husband and kids spent a fabulous mother’s day with her at brunch. I am so grateful for that day and those memories. I consciously told myself to take pictures that day, I knew the end was coming…but I couldn’t bring myself to do so, I really did not want to believe she would not beat her demons. I wanted to take pictures in July at my son’s first birthday, and Halloween and Christmas….

So May 22, no one could reach my mom after 9pm. We now believe she committed suicide sometime in the night. It was cold and dark. She hated both things. The amount of self-hatred she had still overwhelms me. I took my children to the doctor the next morning. I went to lunch and had a good time with my girlfriend and her kids. On the way home, I knew someone needed to check her. I called my dad who I picked up (he had moved out by this point), he jumped in my car and I told him to just drop me and as soon as I found her, he could come back.

The house was locked up tight. I had to get in through the basement garage.

Inside, silence awaited me. I knew something was very wrong.

I checked her bed which was empty.

The living room had her diet coke on the coffee table with the TV on.

The dogs were out of food and water, which on her worst day was unlike her.

I went out to the back deck and found her…floating upside in my childhood family pool. After screaming and calling 911, everything becomes a blur. The operator tried to coax me to get her out of the pool, I knew there was nothing I could do at that point. No one who is living even a little bit floats like that. That is one image I will never, ever un-see. Obviously, anyone in the funeral profession knows that state police came and investigated and the medical examiner was called in. Her official autopsy report ruled her death as suicide by drowning.

We went through the motions and planned a funeral. I suppose I must have been there, I don’t really remember much. I read her eulogy. We had a gathering after with an Irish band playing. She would have loved it.

Through my whole life while my mom was living, I struggled to find my place in life. I went from degree to degree changing from nursing to teaching secondary education and finally to accounting, which is the field where I worked when she died. My mom was cremated, we did not bury her for six months after her death. At her cremains burial, I was chatting with the funeral director who was looking for someone to help balance his checkbook. I offered to help. That was two and half years ago. I’ll be done my degree in mortuary science in May and sit for my board in June. I like to look at the change in careers as my mother’s final gift. I know that I can help families during their times of heartache and sorrow because I can literally relate. I know the importance of having someone guide you and be supportive.

Since my mom’s death, our family has also banned together to create a non-profit organization “Brake the Silence” which is aimed to break the stigma of mental illness and prevent suicide. I will not let my mother‘s death be in vain. In life, she helped others. She will help others in death. Through her story, awareness is brought out.

It is easy to ignore mental illness; it is not as in your face as many other illnesses. Addiction is also easily ignored. But when you hear of the staggering numbers of suicides as direct results of both of these, you have to stop and think. Are we doing enough?

My mom’s legacy lives on through her girls and her grandsons. I don’t harbor any anger towards her. I just miss her.

And, as a final note, and her favorite song by Led Zeppelin says:

And as we wind on down the road
Our shadows taller than our soul.
There walks a lady we all know
Who shines white light and wants to show
How everything still turns to gold.
And if you listen very hard
The tune will come to you at last.
When all are one and one is all
To be a rock and not to roll.

And she’s buying a stairway to heaven.

About the author:  I, Bridget, am 31, married, with four little boys (10, 8, 5, & 3).  I’ve lived in Central MA my whole life. I have a Bachelors Degree in history.  I really thought I was going to teach high school. I am currently employed at a funeral home.  I’ve been here for a little over two years. I am also in school through distance learning at the Commonwealth Institute of Funeral Service in Houston, Texas and I will be done in May! YAY! I love my job so far and I cannot wait to be fully licensed in June.

This entry was posted by Caleb Wilde on November 19, 2014 at 7:33 pm, and is filed under Death of a Parent, Suicide. Follow any responses to this post through RSS 2.0.You can leave a response or trackback from your own site.