« 10 Things Bodies Can Do After Death
Mom: On Mental Illness, Suicide and Grief »

Facing Death with a Smile 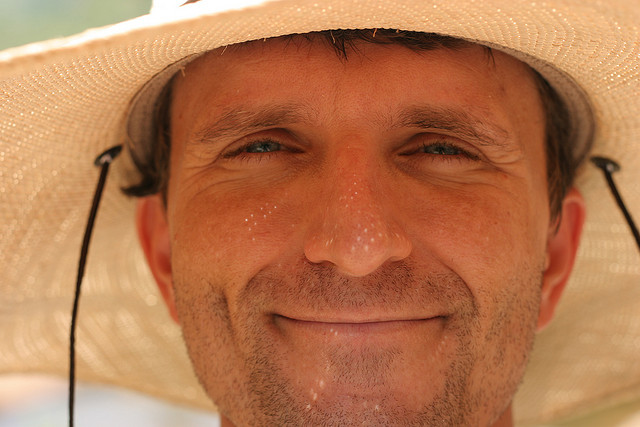 Today’s guest post is from Christopher White.  Christopher resides in Australia with his pug “Freddy”.

I am 64 years old, have led a healthy life, don’t smoke, enjoy a drink occasionally and I tend to avoid stress. I have never married, no kids, have a great family, and life is pretty well perfect. I have many wonderful friends and no enemies.

I began to feel unwell in about June this year – just vague feelings of not being at my best. My health became progressively worse, despite monthly attendances at my local doctor, who had been taking regular blood tests. One month ago I went to see him, I lay on his couch and he tapped two fingers into my abdomen area. I couldn’t believe the pain – he said “There’s something wrong here, you better get to the hospital straight away.” I had a mate deliver me to the local town hospital. He said on the way “They are going to ask you what your allergies are. Tell them you are allergic to big women with tattoos.”

Admitted through the emergency department, rushed into the scanning and X-ray departments, transferred by ambulance to another hospital about 50kms north, where I was taken in for an emergency operation.

When I came around, several hours later, the doctor told me they had removed about 40cm of cancerous growth in the intestines – he called it a bowel resectment. I spent 16 days in the intensive care recovery until, very well tended by both medical staff and the nursing team. Some of the other patients were a different story – I am unused to spending sleeping time with others, with their snoring, loud mobile phone conversations at all times of the day and night and people just being plain rude to each other. “Hey nurse – where’s my bloody pain killer – should have been here half an hour ago?”

When a nurse asked me how I had slept, I said that the snoring from across the passage was like “listening to a rainforest being destroyed.” I suggested that, armed with a baseball bat, some of us in the ICU would have got a lot more sleep, and that business may have been a bit brisker downstairs in the emergency admissions department.” She laughed, a bit, and said “You will recover quickly – grumpy old men always do better.” I am also pleased I did not pass on anything about being allergic to large women with tattoos, as this was an accurate description of most of those taking my blood and doing other tests.

The medical team have advised me to have lots more tests later in the year, to make sure all the cancer has been removed. One man even said “You might get better, or you might die – it is hard to say at this stage.”

I had plenty of time to think about things, stuck there in my little calico cubicle. I managed to blot out the neighbouring surroundings, and just had a really good think about things in general. I have had a very easy life – never been involved in a war, feuds, arguments. I have never had to work too hard, things have come easily to me. Always enjoyed good health – hardly ever had an unhealthy day in my life. I thoroughly enjoy my job, which involves running a small B&B here in a beautiful part of the world.

In a way, my life has been like attending a pleasant party, when one of the ushers taps me on the shoulder and says “OK mate, your time is up and you have to leave.” My first reaction is to say “Well, thanks for having me, which is the easiest way out?” I have never felt anger, betrayal, denial or “Why me? I don’t deserve this.” Instead, I have a serene feeling of relief and acceptance.

I see clearly the advantages of early checkout. OK, 64 is a bit early, but when is really the right time? There will be no Alzheimers Disease, no lonely old age in some grey nursing home, being fed on paste, and having someone else attend to my bathroom needs. No eccentric old man living in a boarded up house in unhealthy conditions, smelling of cat urine. I have few regrets – one of the main ones is leaving my two year old Pug dog Freddy, even though I know he is being left in the best of care.

If the cancer has spread, or returned, I reckon I have about nine months to prepare for the end. I am very fortunate to have a great friend to look after me, cooking, cleaning, company, transport etc. I am very grateful that I do not have a thing to worry about. This is more than long enough to get my affairs in order – most of that has already been done. I am glad there are no awkward reconciliations to endure. I await my own change of cosmic address with a good deal of interest.

This entry was posted by Caleb Wilde on November 19, 2014 at 12:35 pm, and is filed under Dying Well, Guest Posts, Planning for Death. Follow any responses to this post through RSS 2.0.You can leave a response or trackback from your own site.