« Memories Transformed: 3 Stitch Creations
This Funeral Isn’t About You »

I motioned to where he should park his car in the funeral’s procession line.  He threw it in park.  Got out, straightened his tie, looked me in the eye and said, “I hate these thing.”  I get told a variation of that line at least once a month.  People don’t like funerals.

Death is kind of like puberty.  Sure, we know it’s coming.  But no matter how much we’ve studied it in middle school and how much our parents have jokingly told us “it’s coming”, nothing can prepare us for the questions and awkwardness of it’s arrival.

And so when a funeral comes our way, so do a hundred questions:

Do I go to my co-worker’s mother’s funeral?

Do I bring my kids?

Do I send a card?

Can I pull out my phone and play Angry Birds during the funeral service?

WHERE IS THE FREAKIN RULE BOOK ON FUNERAL ETIQUETTE?

Death acts like a god.  It doesn’t care about your schedule.  It doesn’t care that you have a major interview for a new job, or that you’re on vacation.  It does what it’s suppose to do whenever the hell it wants to do it.

And funerals are the same way.  They’re scheduled at the weirdest times … like 11 AM on Tuesday morning, when you were supposed to have your much needed spa treatment.  And right in the middle of the college football game that you really, really wanted to watch.

You open up your wardrobe and you see sweatpants, a really short sundress, a couple t-shirts and khakis.  But churchy dress clothes?  Who dresses like that anymore?

So you think to yourself: Should I go out and buy a suit?  Or should I just go to a funeral in a dress shirt/sundress, tie and bluejeans?   You don’t want to overdress (or you’ll look like the funeral director) and you don’t want to underdress ’cause that’s just disrespectful.  You look through your closet a little more and there in the back is your old prom dress … and the thought crosses your mind … “nah.”

What to say when you’re in the viewing line.

You jump into the viewing line.  And you see one of your friends a couple spots up.  You’re uncomfortable.  She’s uncomfortable.  You start talking about things … anything but the obvious.  Before you know it your forget you’re at a funeral and you start laughing about some random poop story she’s telling.  Like hysterically laughing.  Then you look up and the rest of the viewing line is throwing some heavy Michelle Obama shade right at you. 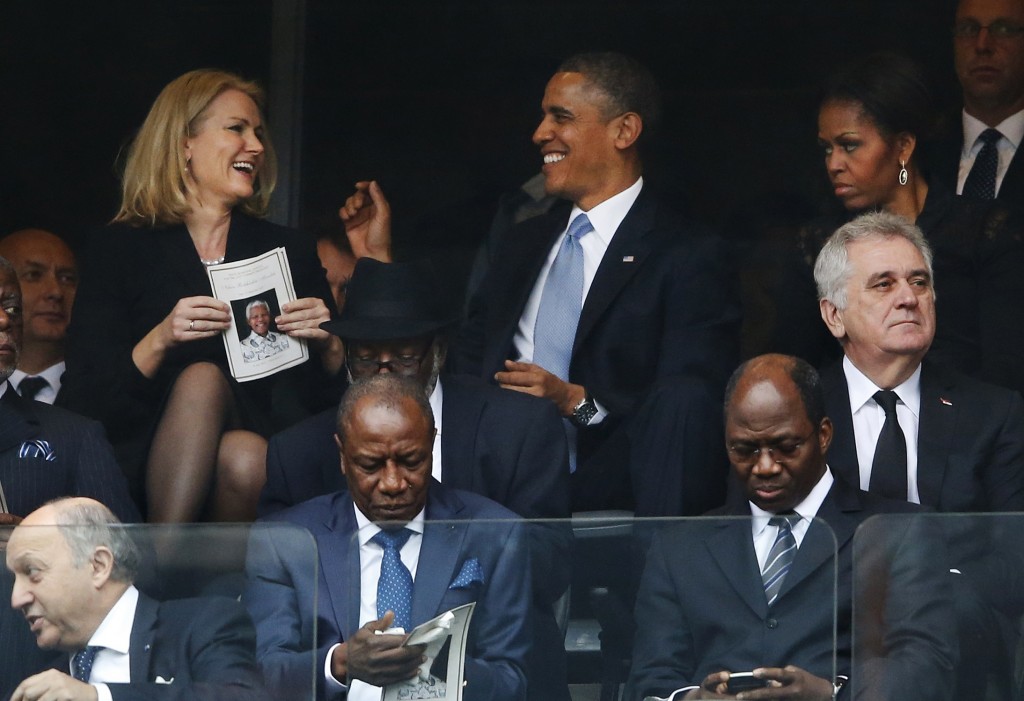 Now that you’re right in front of the body you have this strange desire to touch it.  You want to touch the hands, the face … something.  And you remember, “It’s called a viewing … just look.  It’s not called a touching.”  So you keep your hands firmly planted at your side, hoping your hands don’t evolve a mind of their own and reach out and grab the deceased.

What to say to the family. 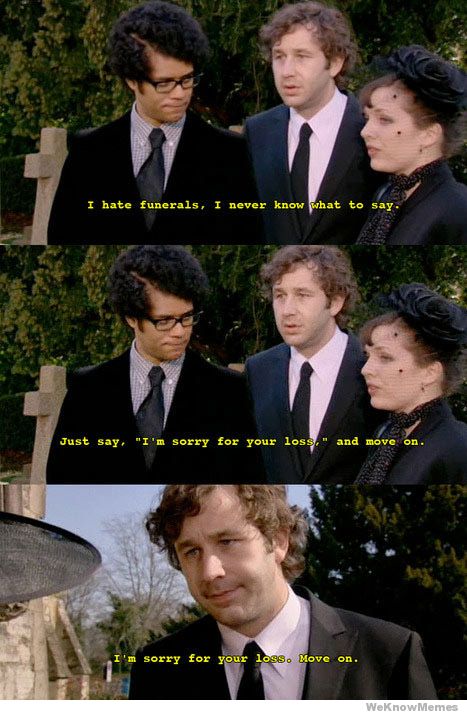 To Hug or Not to Hug

Maybe you know the son of the deceased … or maybe you just knew the deceased and not the rest of the family.  But, there’s like 20 people in the receiving line … brothers, sisters, cousins, uncles and aunts.  And you … you don’t know any of them.

The funniest things come to mind during a funeral.  Really, they aren’t THAT funny, but because the funeral service is so solemn (and yes, at times boring), everything becomes sort of funny.  So you bit your cheeks.  Harder.  It hurts now.

After the whole depressing, horrible thing is finished, you realize, “OMG, I’M GOING TO DIE.”  One day that will be me and that will be MY funeral service.  Up until that point, you thought you were immortal.  And now … gawd I hate funerals.

This entry was posted by Caleb Wilde on January 26, 2015 at 8:45 pm, and is filed under Dark Humor. Follow any responses to this post through RSS 2.0.You can leave a response or trackback from your own site.