21 Steps of an Autopsy 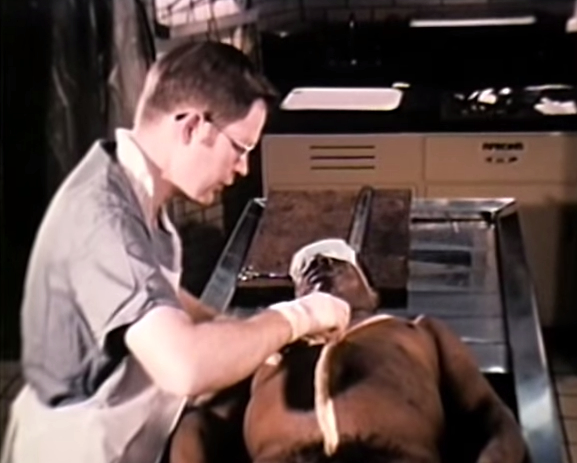 Image taken from the video MEDICOLEGAL AUTOPSY – PART I

Today’s post is an excerpt from The Odd Index by Stephen Spignesi and is being posted with Stephen’s permission:

1.  The dead body arrives at the morgue.

2.  The body’s identity is confirmed, assigned an identification number, and given a toe tag, which is a cardboard ticket with all of the corpse’s pertinent information written on it. This tag is tied to the big toe.

3.  The body is photographed from head to toe, front and back, in the clothing it was wearing when it arrived at the morgue.

4.  The body is photographed from head to toe, front and back, completely naked.

5.  The body is weighed on a scale, and the weight is recorded. The body is also measured for length, and completely X-rayed.

6.  The fingerprints of the corpse are taken. In instances in which hands and/or fingers are missing parts are duly noted.

7.  The clothing the deceased was wearing upon arrival at the morgue is carefully examined. Fiber samples from the garments are taken for later study, and stains on clothing are noted and examined.

8.  Any and all moles, wounds, tattoos, scars (including surgical scars), and other physical body anomalies are noted and examined.

9.  The corpse’s fingernails, toenails, skin, and hair are examined. The skin on the arms and legs is carefully checked for syringe markings.

10.  During a medical autopsy of a female, a rigorous examination of the external genitalia (labia, pubic hair, etc) is performed to determine whether or not there was a rape or sexual assault committed against the woman prior to (and/or after) her death. 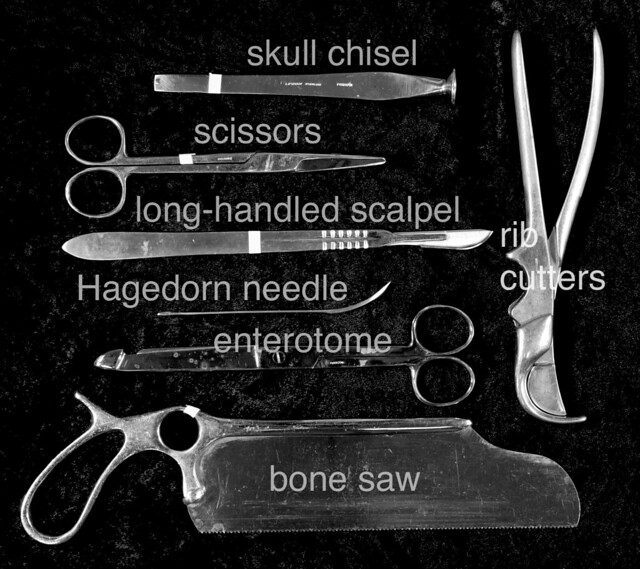 11.  Body fluids (blood, urine, etc) are withdrawn from the body and subjected to comprehensive toxicology tests.

12.  The coroner makes a huge, full body-length “Y” incision that opens up the entire front of the body. The incision starts at each shoulder, proceeds on an angle down to the mid-chest, and then joins into a straight line that extends all the way to the pubis. This is the most dramatic element of a medical-legal autopsy, and most people who have never seen one performed are stunned by the dramatic way the body is spread wide by this incision. Many people have, at one time or another, seen some sort of surgical procedure performed. The incisions, even for major abdominal surgery, are thin, neat, and relatively “clean.” An autopsy incision need not be neat, nor concerned with excessive bleeding. Thus, the corpse is split wide open by a deep cut that is a very effective reminder that the person being autopsied is, in fact, quite dead.

13.  First the organs of the upper abdominal cavity-the lungs, heart, esophagus and trachea-are removed. The coroner then takes out the lower abdominal organs, which include the liver, spleen, kidneys, adrenals, stomach, and intestines. Slices of each organ are taken and tested.

14.  The internal genitalia of both males and females are examined. In the case of females, the uterus and vagina are carefully studied for signs of pregnancy, rape, or some form of sexual assault.

15.  The organs of the pelvic region, including the bladder, the uterus, and the ovaries, are removed. Samples of each organ are taken and analyzed.

16.  When the cause of death are either drowning or a suspected poisoning or drug overdose, the contents of the stomach are removed, examined, and carefully analyzed. All findings are recorded.

17.  Any and all bullet wounds are recorded. The number of wounds is noted, as well as the perceived direction(s) of the bullet(s). An estimate, based on the configuration of the bullet entrance wounds, is made as to what distance the gun was from the victim when it was fired. All bullets are removed from the body and placed in plastic bags. The bullets are then examined and recorded as evidence.

18.  First, a deep incision is made in the skin of the scalp. The cut, which is called intermastiod, begins behind one ear, travels over the top of the head, and ends behind the opposite ear. The scalp is then grasped firmly and pulled forward over the face, baring the skull. Using an electric saw, a wedge-shaped portion of the skull is cut out and removed, exposing the brain. The brain is then removed in its entirety, weighed, and examined.

19.  Since he or she is now through with them, the coroner returns all of the removed internal organs to the body cavities.

20.  The autopsy findings, complete with a final opinion as to the cause of death, as well as all reports and photographs, are turned over to legal authorities. This “package” becomes part of the corpus delecti, and is used as evidence in a court of law when necessary. The folder containing all of this detailed information is known as the case file.

21. A final determination is made as to the cause of death, and the death certificate is filled out.

For more information about the author, Stephen Spignesi, visit his website HERE.

This entry was posted by Caleb Wilde on March 17, 2015 at 9:29 pm, and is filed under Aggregate Death. Follow any responses to this post through RSS 2.0.You can leave a response or trackback from your own site.