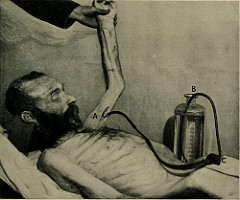 In the world of embalming, there are a couple embalmers who are damn near miracle works.  Legends of the industry.  When I was in school, our embalming professor worshiped an embalmer named “Jack Adams.”

If the funeral industry had saints, Jack Adams has worked enough miracles to be canonized a couple times over.  But there are only a few saints.  The rest of us are just human, with limited tricks and limits to our art.  And there are some things that the mass majority of us can’t fix (although some embalmers will likely differ with this list because we embalmers are a vexed and opinioned bunch).  Here’s ten:

ONE.  A couple years ago, a funeral director friend of mine picked up a dead man in his 60s from the hospital with black pigmented skin.  The deceased’s wife was black.  His children were black.  And my funeral director friend assumed that the deceased was black.  The day of the service the wife walked into the church to view the body and yelled, “That’s not my husband!  My husband is white!”  It was, in fact, her husband, but unknown to the funeral director, the drugs that were given to the dead guy by the hospital, coupled with his cause of death had stained his skin black.  I thought that my friend was exaggerating, that maybe it was Formaldehyde Gray, but when I saw the pictures (that were taken for lawsuit purposes) there was nothing gray about this man’s skin.  This is incredibly rare.  I’ve never seen it, nor has my grandfather who has embalmed nearly 10,000 bodies, but sometimes the circumstances and the body combine for some distinct changes that embalmers can’t entirely change.

TWO.  TISSUE GAS (aka Clostridium perfringens). The words that strike fear into the heart of the embalmer.  Tissue gas results from an organism that duplicates itself every six minutes, causing a normal dead body to totally change in a matter of hours.  Tissue gas is so contagious that if it gets on our embalming instruments, it will spread to the other bodies.  It’s like the movie Outbreak but in a morgue.  And once it takes over, we pray for a cure, but that prayer is rarely answered.

THREE.  DISMEMBERMENT  Amazingly, we can fix some kinds of dismemberment.  If a person is decapitated in a clean fashion at the neck, it’s possible — although unlikely — for us to make things work.  But, say a person is laying down on a train track and cut down the middle from pelvis to head, it’s possible to embalm them if we can find the arteries, but restoring them is a no-go.

FIVE.  DECOMPOSITION  My Great Uncle (a funeral director for over 50 years) served in the Grave Registration Unit during the Korean War.  His group was responsible for embalming the soldiers lost in battle.  As you can imagine, some of the soldiers came back in stages of advanced decomposition, rendering arterial embalming a near impossibility.  So, instead of arterial embalming, they’d do what my Uncle called “pickling”.  There was a small swimming pool of embalming fluid and they’d drop the bodies in the pool and let the bodies soak until they were pickled enough to be shipped back home.  As a side note, my Great Uncles entire unit would eventually die from lung cancer from breathing in the fumes of the embalming pool.

SIX.  SERIOUS BURNS ON THE FACE.  We can’t fix that.

SEVEN.  POSTMORTEM STAIN  “That doesn’t look like my son!” she yelled as she viewed her 45-year-old boy for the first time since his overdose.  I had prepared her for what she was about to see.  I told her that he had laid for a long time on his face.  That there was distention.  That we had to use opaque makeup because of the postmortem stain.  That postmortem stain is very difficult to remove with embalming.  And that he wouldn’t look like she remembered.  “I still want to see him,” she said.  And so she did.

EIGHT.  SEVERE RHEUMATOID ARTHRITIS,  HUNCHBACK, OR ANY OTHER SKELETAL DEFORMITY.  When a person has been bedridden for an extended period of time (usually in a nursing home), their posture can suffer severe deformity from a number of causes (note: it can be caused by improper nursing care, but usually it’s simply caused by immobility).  Although it’s rare, some families leave their family member in a nursing home for years on end without visiting them.  And sometimes the nursing home residents can suffer deformity over the course of those years, which is an unwelcome surprise when the living family sees the deceased lying in a mangled position in a casket.  We can correct some deformity, but most are skeletal and can’t be repositioned.

NINE.  JAUNDICE GREEN.  Normal jaundice is yellow, but when too much embalming fluid is pumped into a body that yellow turns to a Gamora colored green.  Once you go Gamora, you don’t go back.  We’ve created a problem we can only fix with opaque cosmetics that can look like a spray tan gone wrong.

TEN.  THE ONE-THIRD RULE.  Generally speaking, if one-third (or more) of the head is disfigured, it’s unlikely we can fix it.  We can try.  We can put hours and hours into restoration.  We can piece the bones back together, wax over the deep cuts and wounds, spray the wax to get a uniform color, and maybe, just maybe, we can pull off something that resembles the deceased.  Or, we can call in a miracle from Jack Adams and he can do his wonders for a couple thousand bucks.

This entry was posted by Caleb Wilde on July 3, 2017 at 11:42 am, and is filed under Embalming vs. Cremation. Follow any responses to this post through RSS 2.0.You can leave a response or trackback from your own site.