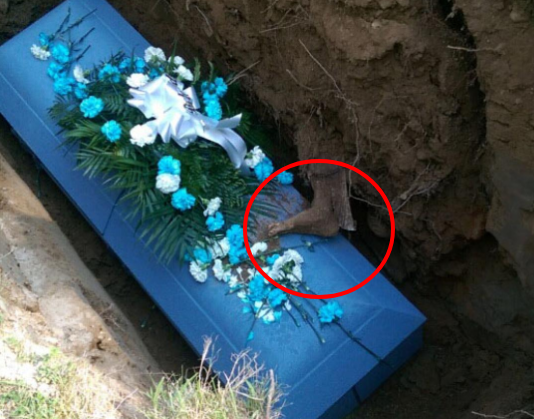 You may have seen this article floating around the interwebs about the decaying foot that popped out of a neighboring grave as the family of Cleveland Butler was burying him in his grave (pictured above).
A couple things: this doesn’t seem to be an Onion article, although that is exactly what I thought it was at first glance.  It’s been in the New York Daily News twice (HERE and HERE), so it’s either a REALLY good hoax, or it’s true.
According to the article, the Mount Holiness Memorial Park Cemetery doesn’t require an outer burial container (vault / grave liner), as you can tell by the photo. The blue casket of Mr. Butler is simply being lowered into the ground, sans burial container, as noted by the cemetery caretaker.  Most cemeteries require an outer burial container partially so body parts aren’t popping out, but mainly so the cemetery doesn’t have casket sized sink holes from old, collapsed wooden caskets (photo below).  Outer burial containers are — how shall we say it? — superfluous.  But, they’re part of the American Way of Death, part of the “keep death clean” mantra of ‘Merica. 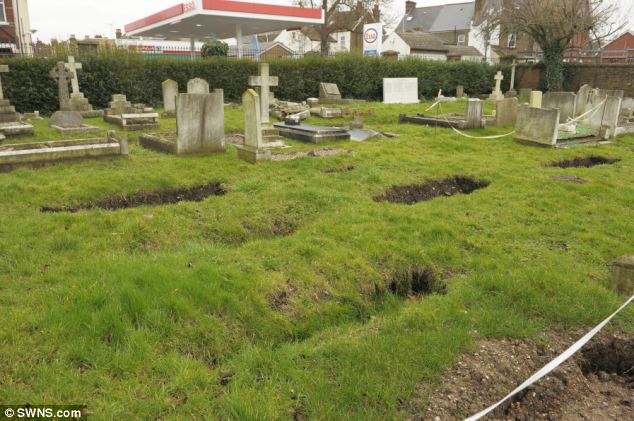 Speaking of the “keep death clean” mantra, let’s give a slow clap to whoever embalmed that foot.  That foot has been dead for almost 50 years, it has been exposed to the elements, and it still has its footiness.  The fact that embalming has the ability to preserve dead bodies for such an extended period of time should give us pause: how long will bodies untouched by the elements actually last?  Some funeral directors who have witnessed disinterments have claimed that they’ve seen bodies 70 years dead that look like they were buried yesterday.  Meaning that your grandmother, maybe even your great grandmother, maybe even your great, great grandmother could be six feet below the ground in nearly pristine condition, like the day they were buried.  I find it facinating as both an embalmer and as someone who has studied cultural attitudes of death.
Per the New York Daily News, the daughter of the deceased said,

“I’m so overwhelmed.  I’m very stressed, depressed because I’ve never, ever been to a funeral before and seen anything like this.”

The family is considering a lawsuit, and I’m not diminishing the family’s feelings or experience.  After reading the article, it does seem like the cemetery could have handled things a little bit better.  Although they may not have been able to stop the foot from popping out on Mr. Butler’s casket, they could have been more sensitive in explaining to the family how it happened.

With that said, I do feel the culture of “keep death clean” has amplified such experiences.  For many cultures, seeing death and caring for their dead is a part of their lives.  There is a disconnect between the living and the dead here in America.  We’ve tried so hard to keep death clean that whenever we see the dirty of death, we’re surprised and traumatized.  In a sense we’re all to blame.  The funeral industry is to blame.  The cultural posture of death denial is to blame. The medical industry that keeps death clean and hidden is to blame.  And the fear that most of us have towards death, and dead bodies, are to blame.
I feel deeply for the Butler family as such an experience is definitely traumatic, but I also hope that the future of our relationship with death allows us all to see the dirty of death without being surprised or disgusted.  Death holds too much humanity and goodness for us to keep it separate from our everyday lives.

If you’re interested in seeing the dirty of death, and yet the beauty of it, I wrote a book about it:

This entry was posted by Caleb Wilde on August 15, 2017 at 6:06 pm, and is filed under Death in the News. Follow any responses to this post through RSS 2.0.You can leave a response or trackback from your own site.