« About that couple that fell off a cliff while they were taking a selfie (boring thoughts only a funeral director would think of)
Episode 10 of The Story of My Death Podcast: John Quinn on living with Stage 4 heart failure »

These screenshots are captured from a VICE video on a Mexican Forensic Dentist named Dr. Alejandro Hernández Cárdenas.  If you want to watch the video, click the link HERE.  As a forewarning, some of this photos show photos of an unidentified corpse that’s being revived from near mummification.  This post is purely for educational purposes: 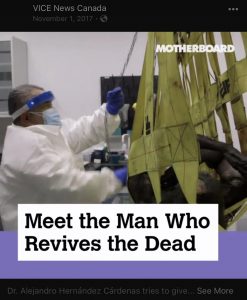 In the photo below, you can see the corpse that Dr. Alejandro is attempting to revive.  The body is unidentified.  The hope is that by dipping this body in Dr. Alejandro’s “special solution”, the body will rehydrate and the forensic experts can identify tattoos, facial features, or anything else that might give clues as to the identity of the corpse. 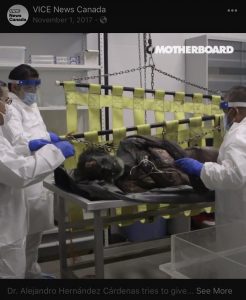 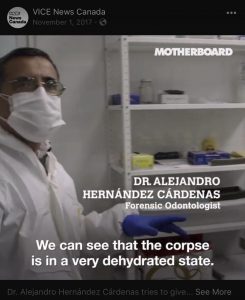 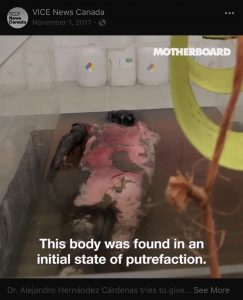 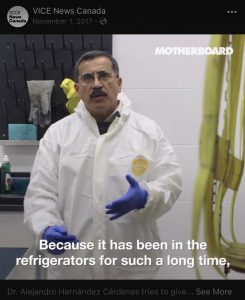 Doc is explaining in this segment that the body was dehydrated (and partially mummified) because it sat in refrigeration for so long. 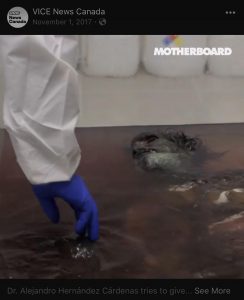 You can see here that the body is placed in a vat of fluid.  During the Korean War, my great uncle served with the grave’s registration unit (he embalmed the US soldiers who had been killed in battle).  Many of the bodies were either in a state of decomposition (if they died behind enemy lines, the US could only retrieve the deceased once those enemy lines were pushed back far enough that the corpse could be safely secured).  Or, many of the bodies were so deformed from the wounds of war that arterial embalming was impossible.

For both of these kinds of cases, the Graves Registration unit would do something similar to what Dr. Alejandro is doing.  They’d place the body in a large vat of embalming fluid.  My uncle would say that they “pickled” the bodies. 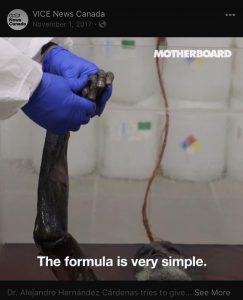 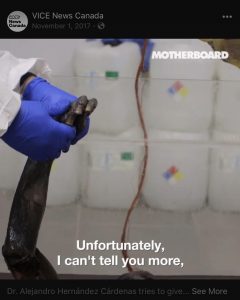 Although he doesn’t disclose his formula, my guess is that it’s similar to the ingredients that we use in our arterial fluid.  There is likely formalin in the formula, as well as a significant amount of cell conditioners and humectants that would rehydrate the deceased. 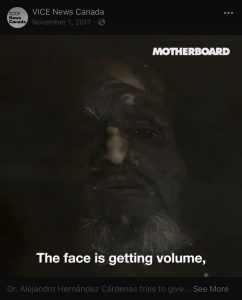 At this point, the deceased had been soaking in the solution for nearly 72 hours. 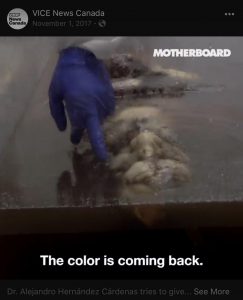 There’s likely some dyes in his solution as well.  Arterial fluid that embalmers use also has dye in it that gives the deceased a more “alive” look.  The dyes that embalmer’s use generally tend to be orange, red, or even a purplish color.  The color of the deceased’s skin before death does factor into the process of determining what color is used. 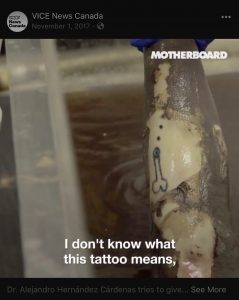 After days of sitting in the solution, a tattoo appears on the deceased’s leg.  Dr. Alejandro Hernández Cárdenas doesn’t know what the tattoo means, but I have a pretty solid guess.  It looks like the deceased either had some jokes or lost a bet.

This entry was posted by Caleb Wilde on June 15, 2018 at 12:40 pm, and is filed under Aggregate Death. Follow any responses to this post through RSS 2.0.You can leave a response or trackback from your own site.