« To my 19-year-old self: I want to let you know, I’ve become a failure
10 Things You Need to Know about Child Sacrifice in Uganda »

I finished writing this post at 1:30 AM EAT after a 12 hour day of traveling the Ugandan countryside listening to some intense stories.  The long day, the jet lag, and the emotions of this whole experience created this post … something that’s slightly more passionate in tone than my normal style.  It’s 6 AM right now, I just woke up and reread it before we hit the road again, and a part of me wants to redact the tone, and the other part (the part that’s winning out) wants to let the post live on its own.  So, I’ll let it live, albiet with this preface letting you know it was written “in the moment”: 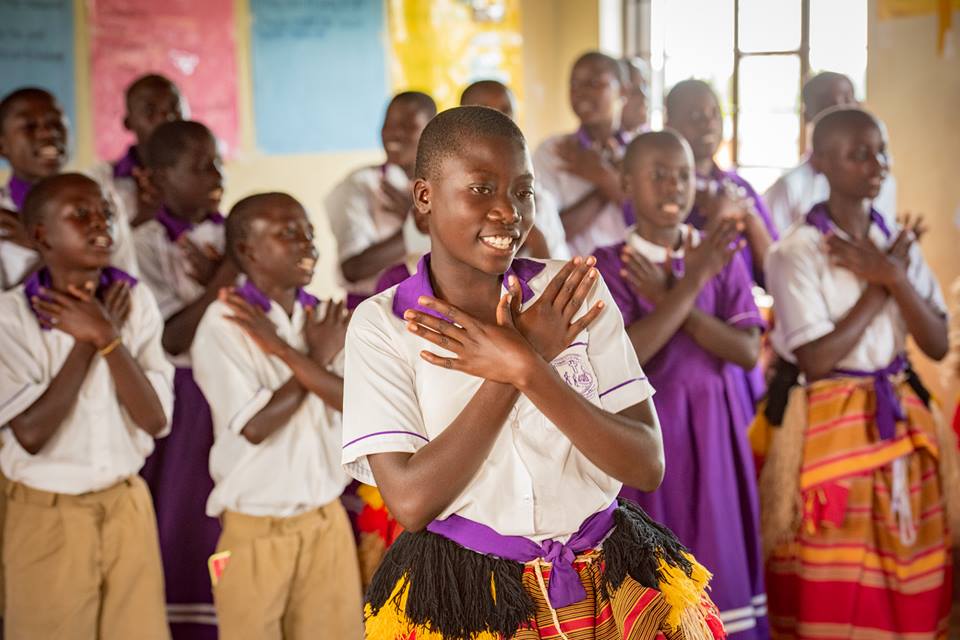 All the photos in this blog post are credited to Laura Reinhardt.

You’re probably here for one of two reasons: you’re offended, or you’re intrigued to see how Caleb’s going to pull this blog post off without causing a holy war.

Let’s get right to it.

I’m in Uganda right now doing what I’m calling “social awareness tourism.” I’m not here as a missionary or a humanitarian, I’m here to listen and write about whatever it is the Ugandans and World Vision – the people and program that is sponsoring this trip – want to tell me. I did know before I came here that we’d hear about child sacrifice practices and the Ugandan people who are working to end it; and we’d hear about the Ugandan people and programs that help vulnerable children, especially the most vulnerable population of Uganda: girls.

I came here to Uganda expecting to hear and retell the stories about the child sacrifices that are going on through Witchdoctors and Shaman, the Amber Alert System World Vision has implemented into local villages to stop abductions, and the retelling of the heart-wrenching story from a survivor of child sacrifice. I thought, “That story fits my death brand, so that will be my thing to write about since the rest of the writers on this trip are women and will likely pick up on the wonderful things World Vision is doing for vulnerable children, especially vulnerable girls. I’ll write about child sacrifice BECAUSE THAT’S IMPORTANT TO ME, and they’ll probably want to write about the girls BECAUSE THAT’S IMPORTANT TO THEM.

A young Ugandan girl telling us how she aspires to be the chief of Ugandan’s law enforcement so that she can help protect the vulnerable, especially the girls.

I realized how I was wrong … when yesterday and today happened.

Yesterday, it was explained to us how the simple fact that Ugandan girls don’t have access to sanitary items — like pads — they’ll often miss school for the duration of their periods. That they’ll sometimes miss enough school – if they’re periods are heavy and long – that they’ll drop out of school completely because they’ve missed too much school time. BECAUSE THEY LACK ACCESS TO PADS!!!

A couple of girls and boys (!!!) from a World Vision sponsored program demonstrated to us how they make reusable and sustainable pads for the young girls in the surrounding area. World Vision explained how this program is replicating itself throughout Uganda, keeping girls in school.

Today, it was made much clearer WHY having the girls stay in school is so important. Sara, a Ugandan native and the director of the World Vision Uganda program called SAGE (Strengthening Community Accountability for Girls’ Education) said it this way, “Education is the cure to societal ills.” I know what you might be thinking … maybe something like, “well that’s a liberal agenda.” And yes, it might be. But here, it’s less an agenda, and it’s more a reality. 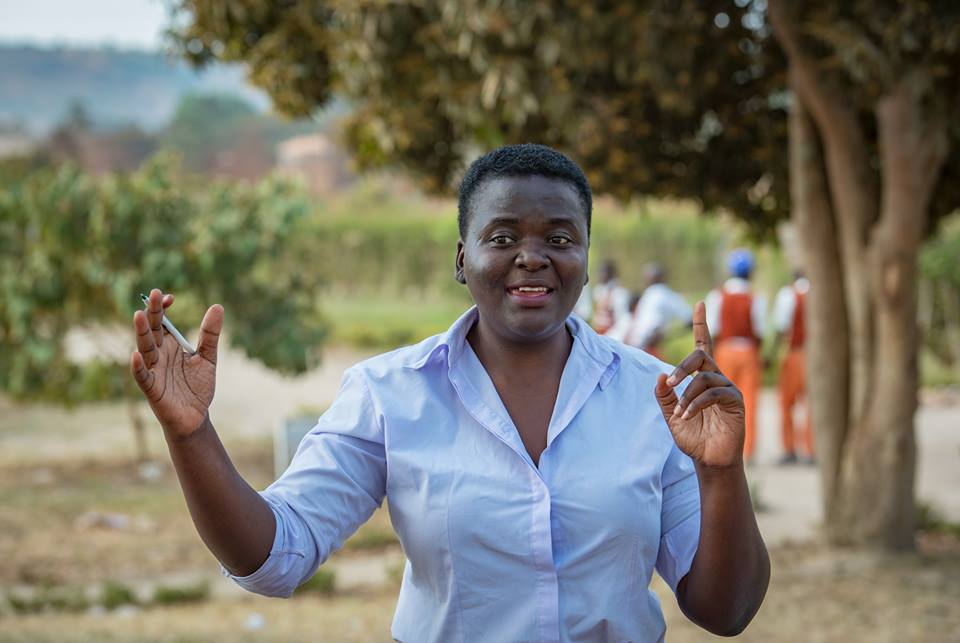 This is Sara, the director of the SAGE program.

In Uganda, when a family is in extreme poverty, they’ll often trade their girls to marry men.  The men trade back a decent supply of food or other items that can increase the family’s food supply and decrease the family’s suffering. Before we judge, imagine you had five children and you couldn’t feed any of them unless you sold one to feed the four. It’s horrible, it’s sad. Let’s pray none of us ever are put in a situation where we have to make such a decision.

The girls are sold off to men starting at eight years of age. Because they’re so young, most will get pregnant as soon as their bodies are able, and often either their babies or they themselves die from the physical labor of a pregnancy at such an early age.

Once they’re sold into marriage, they won’t complete their education; they’ll have babies – sometimes beginning at the age of 13 through 14 – and they’ll be forced to raise the children (because that’s what the women in Uganda are supposed to do) as young teenagers.

How was I wrong about what’s important for me to write about here in Uganda?  I WAS WRONG TO BELIEVE THAT THE VULNERABILITY OF THE UGANDAN GIRLS WASN’T IMPORTANT TO ME … THAT THIS TOPIC IS JUST FOR THE FEMALE WRITERS IN OUR GROUP TO ADDRESS.

If the girls of Uganda can learn their value, if they have structures in place in their school and in their community to help them through the prospects of being forced out of school by poverty or marriage or labor; when the girls have access to sustainable sanitary care; when the girls are empowered to dream big, when they can effect change, they can lead a country out of its social ills.  And this affects me in every way possible.

How do I know?

At the end of the day today, Sara showed us one of the groups of Uganda girls in her SAGE program. The girls told us of how they’ve learned their value through Sara’s mentorship, and how the girls hold the other girls in the school accountable for staying in school. If one of their classmate’s attendance starts to fade, these girls from SAGE reach out to that classmate, ask them what’s wrong, ask them what they need, and then the SAGE girls contact the school superiors to intervene.  The superiors listen and do everything in their power to make sure that girl continues her education. 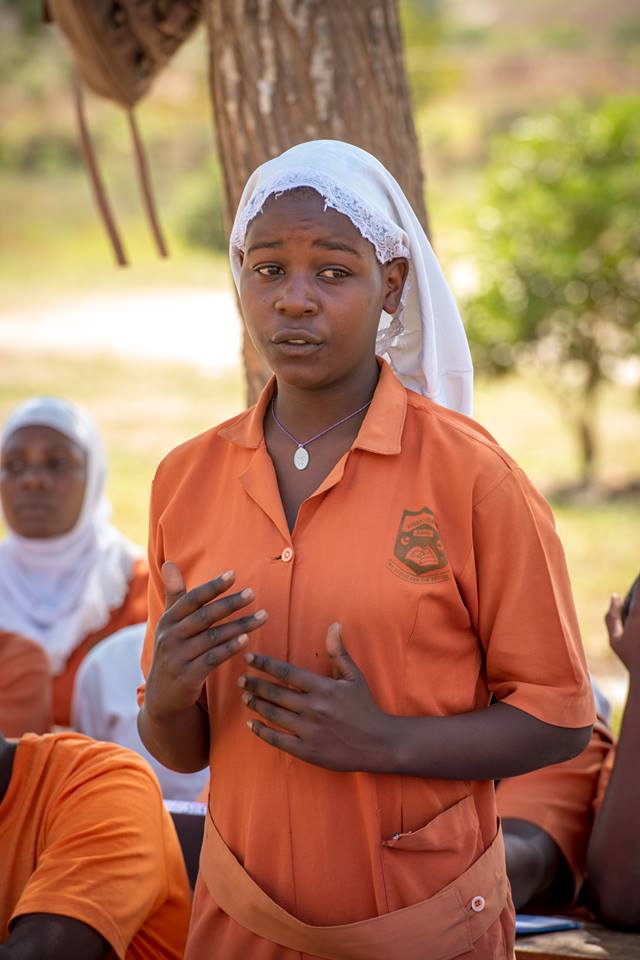 The elected student leader of the SAGE program.

The rest of the young girls we met over the last two days were usually asked to introduce themselves to us (we were asked to do the same thing for them). Most girls would speak in such a small, quiet, shy, abashed voice that we couldn’t hear them. Even when they were prompted to speak up, they didn’t … or they couldn’t. Because they’ve been ingrained by a societal belief that men are their superiors.   And that’s the crux of this whole thing: the men too often treat the girls and women poorly because the men believe they’re superior (and let’s not be so cocky to think this is just a problem for Ugandan men).

The SAGE girls didn’t speak in quiet voices. They spoke loud, eloquently, and confidently. They told us how they wanted to become teachers, social workers, doctors, lawyers, and government leaders. They told us how they wanted to fight for the rights of the most vulnerable. How they’d pursue an education that could give them professions with platforms to make a change for the girls of Uganda.

After listening to these girls talk, Sara opened up a time for us to ask the SAGE girls some questions. I interjected, “I don’t have a question for you, I have something to say”

I told them that men hold all the power positions.

I told them that as they rise up, that nobody likes to give away power, especially men. That they’ll be told, “no” time and time again, but that they’ll need to say, “yes” to ever “no” they’re told until they see their dream made real.

Because it’s not only men that need them, the world needs them.

We need their voice in all the conversations that have been dominated by men.

That they’re strong. That their voice matters. That I’m waiting in anticipation to see what they’ll accomplish, to hear their voice, and learn from all they have to give.

Jesus has already arrived. And Jesus has done good for this country. When Christianity first came to Uganda, Christianity had a large part to play in squashing the beliefs behind child sacrifice, and destroying it completely until the practice was revived a couple of years ago.

This country – and me and you — will be saved from many of our current ills when the girls arrive.

This entry was posted by Caleb Wilde on August 14, 2018 at 6:27 pm, and is filed under World Vision Uganda. Follow any responses to this post through RSS 2.0.You can leave a response or trackback from your own site.