“The Day the Angels Fell”: A death positive novel for children (CHAPTER 1)

A couple days ago I shared a review and endorsement for Shawn Smucker’s children’s novel, “The Day the Angels Fell.”  Here’s chapter 1: 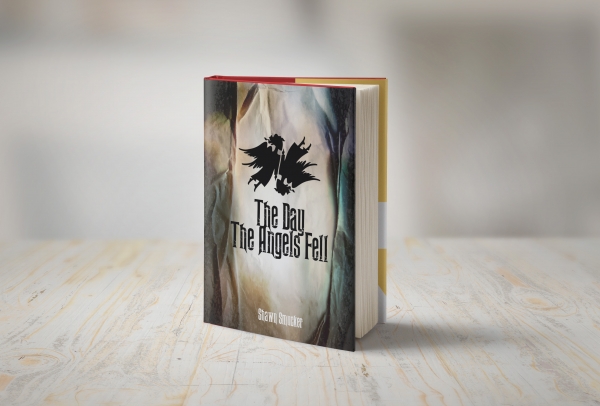 I am old now. I still live on the same farm where I grew up, the same farm where my mother’s accident took place, the same farm that burned for days after the angels fell. My father rebuilt the farm after the fire, and it was foreign to me then, a new house trying to fill an old space. The trees he planted were all fragile and small, and the inside of the barns smelled like new wood and fresh paint. I think he was glad to start over, considering everything that summer had taken from us.

But that was many years ago, and now the farm feels old again. The floorboards creak when I walk to the kitchen in the middle of the night. The walls and the roof groan under the weight of summer storms. There is a large oak tree in the front yard again, and it reminds me of the lightning tree, the one that started it all. This house and I are two old friends sitting together in our latter days.

I untie my tangled necktie and try again. I’ve never been good at ties, probably because I never wear them. But my last friend’s funeral is this week and I thought I should wear a tie. It seemed the right thing to do, but now that I’m standing in front of a mirror I’m having second thoughts, not only about the necktie but even about going. She was my best friend, and although as children we would have done anything for each other, I’m not sure I have the strength for one last funeral.

Someone knocks on the front door, so I untangle myself from the tie and ease my way down the stairs, leaning heavily on the handrail. Another knock, and by now I’m crossing to the door.

“Coming, coming,” I say. People are in such a hurry these days. Everyone wants everything to happen now, or yesterday. But when you’re my age, you get used to waiting, mostly because you’re always waiting on yourself.

“Hi there, Jerry,” I say through the screen, not making any move to open it.

“I won’t come in, Samuel. Just wanted to apologize for my boy again.”

Jerry is a huge bear of a man with arms and hands and fingers so thick I sometimes wonder how he can use them for anything small like tying shoes or stirring his coffee. He’s always apologizing for his boy. I don’t know why—seems to me his boy simply acts like a boy. And because Jerry is always calling him “boy,” I can’t remember the child’s name. I’m not sure anyone ever told me what the kid’s name is.

“I heard he was throwing smoke bombs up on your porch this morning.”

“Oh, that. Well,” I begin, but Jerry interrupts me.

“I won’t hear of it,” Jerry says. “In fact, as soon as I find him he’ll be coming here in person to apologize.”

“No. That boy will apologize.”

“Anything else, Jerry? How are the fields this summer?”

“Green, Samuel. It’s been a good summer so far.”

“Good, good,” I mumble, then turn and walk away because I’m too old to waste my time having conversations that don’t interest me.

“Oh, and I’m sorry about your friend,” Jerry calls to me as I begin the slow ascent up the stairs. His words hit me like a physical object, make me stop on the third step and lean against the wall. They bring a fresh wave of grief to the surface, and I’m glad he can’t see my face.

“Thank you,” I say, hoping he will leave now.

“The missus says she was a good, close friend of yours for many years. I’m very sorry.”

“Thank you,” I say again, then start climbing the stairs. One foot after the other, that’s the only way to do it. I wish people would mind their own business. I have no interest, at my age, in collecting the sympathy of strangers. Or near strangers. In fact, I can do without sympathy at all, no matter the source.

I still imagine myself to be self-sufficient, and in order to maintain that illusion I keep a small garden at the end of the lane. Sometimes, while I’m weeding, I’ll stop and look across the street at where the old church used to be. After the fire they left the lot vacant and rebuilt the small brick building on a lot in town, but the old foundation is still there somewhere, under the dirt and the plants and the trees that came up over the years. Time covers things, but that doesn’t mean they’re gone.

If I’m honest, though, I have to admit that during some gradual phase in my life I became too old to work the farm myself. There was a time, not long ago, when my farm fell into disrepair, and I thought it would be the end of me as well, because I couldn’t bear to watch so many memories collapse in on themselves. Then the family that moved into Abra’s old farm, Jerry and his missus and his “boy,” asked if they could rent my fields and barns. I said yes because I had no good reason to say no. Now they take care of everything and I live quietly in the old farmhouse, puttering in my garden or sitting on the large front porch, trying to remember all the things that happened the summer my mother died.

Jerry’s son looks to be about eleven or twelve, my age when it happened. I wonder what he would do if his mother died. I think he is scared of me, and I don’t blame him. I don’t shave very often and my hair is usually unruly. My clothes are old and worn. I know that I smell of old age—I remember that scent from when my father started walking with a cane.

Sometimes Jerry’s son will hide among the fruit trees that line the long lane and spy on me, but I don’t mind. I pretend not to see him, and he seems to have fun with it, climbing up to the highest branch and peering through an old tube, as if it is a telescope. Sometimes, though, when he gets to the top, I find myself holding my breath, waiting for him to fall. Everything falls in the end, you know. Everything that climbs high tumbles down to the ground.

I stare at the mirror again after climbing the steps and I wonder where all the time has gone. I pick up the necktie and try again, and my old fingers can’t quite get it right. I remember when I was a very young boy my mother would sometimes put a tie on me, her delicate hands weaving the smooth fabric in a magical way.

“There,” she would say, smiling, patting the knot of the tie, and looking rather pleased with herself. “Now you look like a young man.”

The boy reminds me of myself when I was his age. He runs around the farm with sticks and pretends they are swords and magic staffs. Those days seem so long ago. Now I move slowly, carrying only a cane that is nothing more than a cane. I don’t know if I have the power anymore to turn this cane into anything exciting, anything like a sword pulled from a stone or a gun that could kill an Amarok. Sometimes I feel like I have forgotten how to pretend.

I give up on the tie and sit with relief at the desk by the window that looks out over the front yard and the garden and the old oak tree. It’s rather eerie how the farm has returned to almost the same condition that it was in the summer my mother died, the summer of the fire. Sometimes when I look down the lane I expect to see her walking back up from the mailbox, or for my dad to wander in from the barns, dirty and ready for dinner.

After many years of wondering if I could get the story of that summer exactly right, I have decided to simply write it as I remember it. There’s no one else left who was there when it happened, no one to compare stories with, no one to agree or disagree with my own version. As I think through the story, I wonder if it’s even possible that everything happened as my memory tells me it did. It all seems rather incredible.

But one thing I’m sure of: After everything that happened that summer, life seemed fragile, like an egg rolling toward the edge of the table. It seemed like anyone I knew could die at any moment, and that feeling frightened me. But now that I’m old, and everyone I know has died, my own life feels almost unbreakable, like it will never give up.

Which reminds me of something that Mr. Tennin told me, in his thin, wispy voice, right at the end.

“Samuel,” he whispered. “Always remember this.”

I leaned in closer as the fire roared on the far side of the river.

I stare at the obituary sitting at the corner of my desk, the one that I cut out of the paper yesterday—such a small amount of writing meant to tell the story of someone’s entire life. I lift it up and it is light, almost see-through, and for a moment life seems fragile again, and temporary.

I know what Mr. Tennin said can be hard to believe, especially when staring death in the face. Death seems so horrible and huge, and when it comes for someone early, the last thing it feels like is a gift. Death, a gift? I would have shouted at someone had they said that to me at my mother’s funeral. But I’ve been on this earth for many years now, and I’ve seen many things, and I finally believe that Mr. Tennin might have been right.

This is how I remember that summer.

Right now Shawn dropped the Kindle edition price to $3.99 just for our Confessions of a Funeral Director community. It’s well worth the price of the purchase and the time to read it.  You can find the paperback version HERE.

This entry was posted by Caleb Wilde on February 7, 2015 at 5:05 pm, and is filed under Aggregate Death. Follow any responses to this post through RSS 2.0.You can leave a response or trackback from your own site.