10 Terrifying Things About Funeral Homes You Didn’t Know: A Response 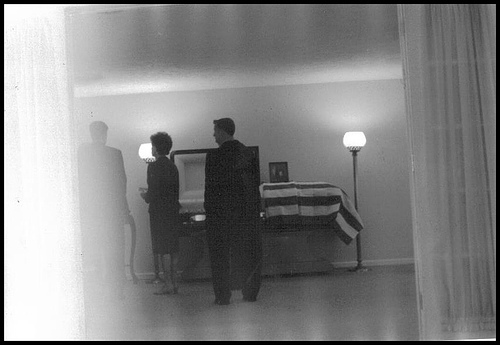 Answers.com recently unpublished an article entitled “10 Terrifying Things About Funeral Homes You Didn’t Know”.  Although I appreciate attempts to talk about death and funerals (and I do appreciate the fact that they took the article down), the sensationalized “answers” in the article, which I put in quotation boxes, are much more concerned about garnering internet views, and subsequently, the money that comes with those views, then they are about the quality of their answers.  Sensationalizing facts on the internet is nothing new, but when you damn the funeral industry for exploiting the masses and you’re hypocritically attempting to do the same with a sensationalized article, you need to be called out.

Here are their “10 Terrifying Things” from the Answers.com article and my responses.

1.  Death is Big Business:  Pardon the pun, but funeral homes make a killing. The caskets in funeral homes are set up to where the grieving family members see the most expensive caskets. It’s a billion dollar industry, and bigger funeral service providers will attempt to acquire every aspect of the business, such as florists and tombstone engravers.

The funeral industry isn’t nearly as measurable as Dunkin Donuts, but here are some rough estimates from 2010: The gross profit margin was 62.5%, which ranked about middle of the road for similar service industries.  But, many of us independent funeral homes had around 10 to 30% gross profit margin.  My guess would be that corporate funeral homes drive up the overall GPM for the industry.  From some stats I found (again, this isn’t measurable like Dunkin Donuts), the net profit margin hovers around 10.70%.

In other words, even if those numbers I used aren’t entirely accurate, it’s very hard to argue that the funeral industry is making a killing.

2.  They Take Advantage:  People in grief are extremely vulnerable, and some funeral service providers are not above taking advantage of that. A funeral director can easily steer families in the direction of more expensive flowers or coffins. At the time, it seems like a showy, elaborate funeral is the only way to honor the deceased.

For those of us funeral directors who are ultimately concerned about service, the idea that we’re “taking advantage” of our customers frankly pisses us off.

It’s like assuming that all Catholic priests are pedophiles.

Answers.com is making a blanket statement that simply doesn’t cover us all.  In fact, it’s these blanket statements like this that incite some anger in those of us who find joy in helping those in their greatest hour of need and confusion.  For the good funeral directors, our joy is helping you, not exploiting you.

And while I can say that many — if not most — in this industry exist for service, there is the dark side — those few — that do as Answers.com describes.

3.  Are You Dead or Just Happy to See Me?  When the body begins to decompose, certain areas known to have heavy concentrations of bacteria often swell to more than twice their normal size. Undertakers have to work fast to drain the bodies of all fluids, and they pack all of the body’s openings with cotton to prevent leakage.

If you want embalming, then yes, we do drain the body’s fluids.  And we usually pack the nose with cotton to keep any liquids from running down the face during a viewing.  If we take out the sensationalism, this one is mostly true.

4.  Broken Parts: Funeral home employees are masters in the art of restoration. They often have to make a body presentable for viewing, despite how the person died. Sometimes, it’s as simple as using cosmetics to cover minor scrapes or bruises, but other times, morticians have to stitch bodies back together.

Answers.com got this right.  Although I’m not sure this qualifies as “terrifying”.  Bwahahaha.  I’ll put makeup on your face.  Bwahahah.  Let me trim your beard.  Look at me, I’m a master of restoration and I’m TERRIFYING.

5.  Embalming: Everyone knows that embalming is the process of removing all the fluids from a body and replacing them with preservatives. What happens to all those fluids from the body? They go right into the public sewage system. That’s what’s really running through your pipes.

Right again, but when you think about the other things that get poured down the drawn (various chemicals, condoms, and menstrual flow), it’s not entirely terrifying.

6.  The Eyes Have It: A person’s eyes are not usually removed from the body when its embalmed. They do start to flatten out, so morticians usually place a cap underneath the eyelid so that it still looks curved, or they’ll re-fill the eye to its normal size.

7.  They May Not Be Doing Their Jobs: In 2002, it was discovered that the Tri-State Crematory had been scattering the bodies rather than properly cremating them. Over 300 hundred bodies were discovered on the crematory’s property. It was revealed that the crematory had been giving the families concrete dust instead of ashes. Some of the bodies were never identified due to body decomposition.

Sadly, this one is true.  Tri-State Crematory did do just as they say.

8.  Please Wait Outside: When funeral directors have to go into someone’s home to retrieve a body, they are often in a hurry. The grieving family naturally wants time to say goodbye, but family members can hinder the work of funeral directors.

If you EVER feel any type of pressure from a funeral home or funeral director FIRE THEM!  Seriously, just fire them.  The fact is that your mind is already clouded by grief and the last thing you need in your life is someone trying to push you around.  You just experienced a death in your life.  You need people who will give you the time and space you need, NOT people who want to push you around.

And, no, we are not “OFTEN IN A HURRY.”  Do you really think a funeral home would survive in a community if we’re always in a hurry?  No.  We wouldn’t.  Most of us treat families like they are our own family.

9.  Drops Happen: Sometimes, dropping the body is unavoidable. Removing bodies of overweight people from five-story buildings, for example, can prove to be quite tricky. Hopefully if it happens, it doesn’t occur in the eyes of the family.

Yes, drops do happen.  I’ve handled a few thousand deceased persons and I’ve never dropped one.  But, it might happen.  I hope it doesn’t.

10.  Caskets Don’t Have to Be Expensive: Caskets are where funeral homes make a lot of their money — the average price of a casket is over $1000. However, a nice casket can be bought between $400 – 600. You just have to shop around. A decent service for your loved one doesn’t have to put you in debt.

If you want to read about why I’m a funeral director (and it has little to do with money), you can buy my words.

This entry was posted by Caleb Wilde on August 4, 2017 at 4:49 pm, and is filed under Funeral Directing. Follow any responses to this post through RSS 2.0.You can leave a response or trackback from your own site.