« Some of the Mistakes I’ve Made as a Funeral Director
“Will You Help Me Pick Up a Body?” » 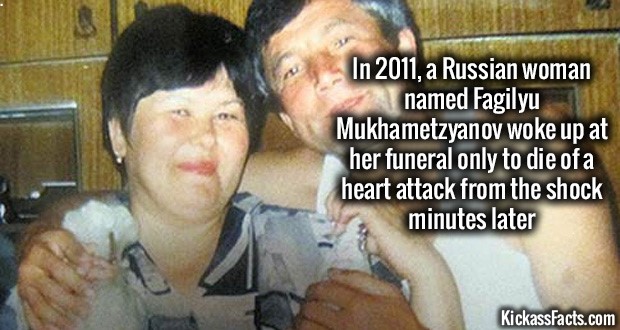 Apparently, this is true.  She woke up, was surrounded by sobbing friends and relatives, and started screaming because she didn’t want to be buried alive.  Some reports state that she died of shock, which is when your body produces a surge of adrenaline that stuns the heart.

This type of death-by-intense-fear is sometimes called a “Voodoo Death.”  There’s a number of psychosomatic causes of death similar to “Voodoo Death”, such as the Broken Heart Syndrome.

Obviously, she wasn’t embalmed.  You don’t come back from THAT!  Her blood pressure must have been nondetectable, so her skin would have been cold and felt “dead” without the normal blood distribution.  That “dead” feeling explains why those who dressed her and put her in the casket wouldn’t have noticed she was slightly warmer than a normal corpse.

The husband said he planned to sue the hospital.  I can’t find anything about said lawsuit (maybe it was settled outside of court), but I hope he received some compensation.  Not that money makes things better, but winning a settlement usually means the hospital acknowledges a mistake.  And that acknowledge can mean something.

This entry was posted by Caleb Wilde on July 29, 2018 at 11:37 am, and is filed under Aggregate Death. Follow any responses to this post through RSS 2.0.You can leave a response or trackback from your own site.